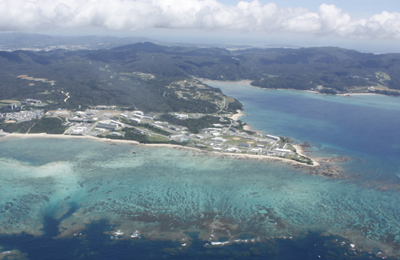 U.S. Marines’ Camp Schwab in Henoko is the proposed site of the MCAS Futenma replacement facility.

Chief Cabinet Secretary Yoshihide Suga announced Tuesday the suspension of the work in order to help ease the strained relations with the prefectural government and give both sides time to hold intensive negotiations.

At the same time, Suga was quick to make perfectly clear that the suspension does not mean anything with the government plans has changed. “The suspension of the project does not represent a change of the government policy, but is intended to give us time to fully explain our thinking to Okinawan authorities,” Suga stressed. He added that the government side is also willing to hear the opinions of the Okinawa side.

Okinawa Governor Takeshi Onaga was quick to respond announcing the same day that his government would not take measures to block the landfill project during the one-month period, meaning he will not cancel the landfill approval for now, as he was prepared to do.

During a news conference in Tokyo, Suga said he would visit Okinawa in August to exchange opinions with Onaga. Prime Minister Shinzo Abe is also scheduled to meet Onaga Friday to again explain his government’s position on the base relocation plan.

As an extra goodwill gesture, Suga said that the central government would make arrangements with the U.S. military to allow the prefectural government officials to make environmental inspections within the restricted area off Henoko. Okinawa officials suspect that the reefs were damaged during the earlier survey work, but have not been allowed to inspect the possible damage.

On his part, Onaga wows to stick to his guns. “I will make it clear again during the upcoming discussions why it’s impossible to relocate the Futenma functions to Henoko.” He added that he is sure he and the central government can forge a mutual understanding on the matter. “I will spare no effort to achieve that,” Onaga said.