Ungami has ensured good catch, safety in Ogimi for centuries 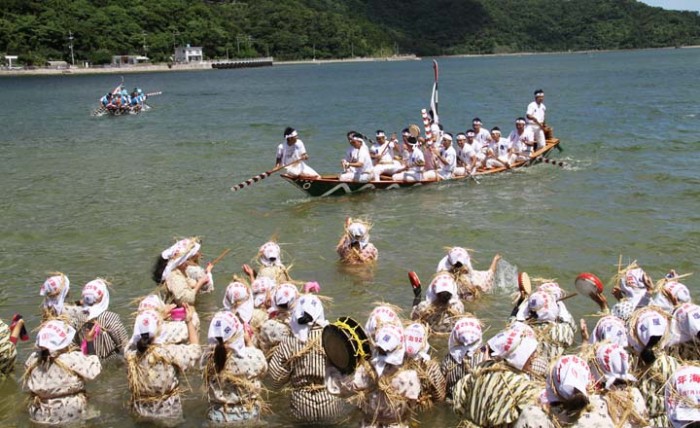 Women wade into the ocean to greet and encourage Haarii crews at the highlight of the Unjami Festival.

One of the most traditional rituals on Okinawa called Ungami Festival takes place in the fishing villages of Ogimi and some outer small islands around Okinawa. Ungami takes place after the end of Obon on the first day of the Boar after Obon, which this year falls on Sep. 8th.

The main event takes place at Shioya area in Ogimi. Ungami is a ceremony to pray for safe fishing and good catches. The festival is said to date back some 400 to 500 years to the Ryukyu Kingdom era.

On that day, Noro, female shamans, pray to Niraikanai (Lotus Land or paradise in Okinawan mythology) for safe fishing and good catches. There is dancing, in which only females can participate.

A Haarii tournament is held after the dance, during which women wade into the ocean waist deep clapping hands and beating drums to cheer and encourage haarii boats racing towards the coast of Shioya. The Ungami of Shioya was designated a Significant Intangible Folk Cultural Asset in 1997.

Ogimi Village is located in the northern part of Okinawa, just north of Nago City, west of Higashi Village and south of Kunigami. Ogimi is famous for the longevity of its people and also as Okinawa’s biggest producer of Shiquasa, a citrus fruit, and Bashofu, a very traditional Okinawan cloth.

More than 60% of Shiquasa production in Okinawa comes from Ogimi Village and this citrus contains remarkable quantities of citric acid, nobiletin, vitamin C, vitamin B1, carotene and many minerals. Especially important is nobiletin, which is credited for preventing cancer in general. It is also said that shiquasa could be a factor in the area’s longevity.