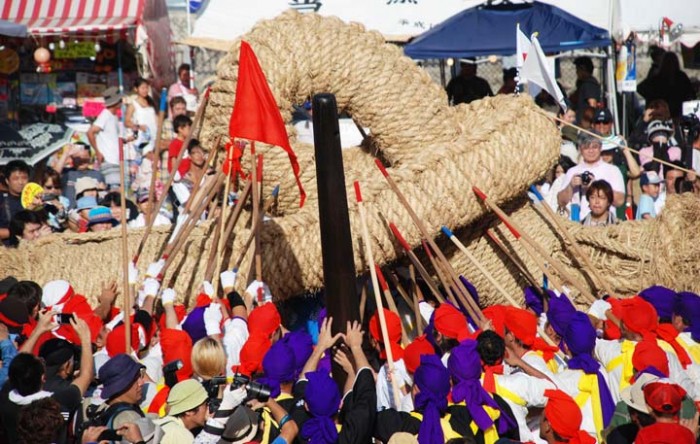 The tug-of-war starts when the ‘kanachi’ pole locking the two halves of the rope is in place, and the rope drops to the ground.

The 33rd Yonabaru Great Tug of War Festival takes place Saturday and Sunday, Aug 15th and 16th, at the Yonabaru Udunyama Youth Field, with most of the action and the great tug-of-war taking place Sunday afternoon. The first day of the festival, Saturday, is mostly dedicated for usual Okinawan Festival activities of eating, drinking and having fun at the food and game stalls on the festival field. 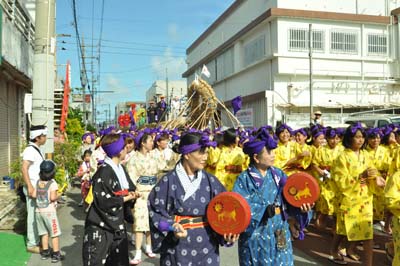 Everyone in the community is involved in the tug-of-war from the parade leading to the main event to the conclusion.

Yonabaru used to be the main port for transporting goods between the island’s northern parts and main cities in the south. A narrow-gauge railroad connected Yonabaru and Naha City via a dozen stations before the war.

The festival starts with a children’s parade at 10 a.m., Saturday, while opening ceremony makes the festival official at 3 p.m. and Mayumi Yamakawa & Shimauta Girls 10 perform at 8 p.m.

The Kids’ Tug-of-War kicks off Sunday at 9 a.m., followed by the Kids Eisa performance 2 p.m. The Procession leading up to the Tug-of-War that includes a sacred ceremony for a good harvest and is an important part of the event, starts on Route 330 at 4 p.m. The actual Tug-of-War begins at 5 p.m. 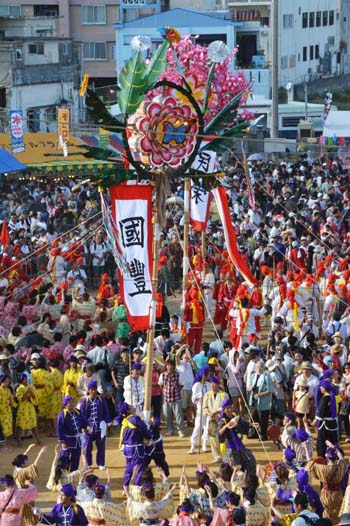 Handling a ‘Hatagashira’ flagpole is a matter of skill and strength and the job of young men in the local community.

A unique feature of the event is local residents’ participation in carrying the big rope to the venue and preparation for the pull. On the big rope, seven people called ‘Shitaku’ dressed up as historical characters from the history the Ryukyu Kingdom accompany the rope to the venue where the tug-of-war starts.

Other Sunday events include an island wide Okinawan-style sumo competition at 6 p.m. and Eisa, Masaru Moriyama concert and fireworks at 8:45 p.m. that ends the festival.

Admission to the festival, which boasts 440 years of history, is free. The festival grounds are open 10 a.m. ~ 9 p.m. on Saturday and 9 a.m. ~ 9 p.m. on Sunday. Free parking is available at temporary parking areas on the prefecture-owned land next to Marine Plaza Agarihama, Agarihama Baseball Field, Yonabaru Elementary School, Yonabaru Chamber of Commerce, and Uenomori Park. A free shuttle bus will run between the prefecture land and the venue from 3 to 9:30 on Sunday only.

The series of activities that include the transfer of the rope is called Michi-junee (Parade on Street), and it’s an important part of the ceremony. A video on the procession is at http://www.town.yonabaru.okinawa.jp/ootsunahiki/movie/movie-tokucyo2.html