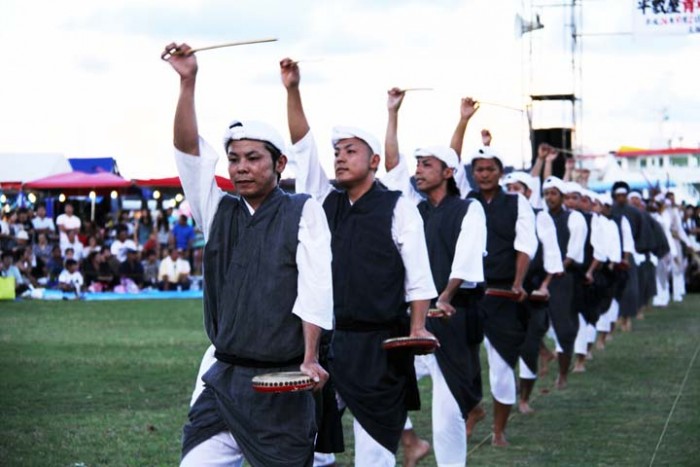 Although the exact origins of Eisa are unknown, the dance was definitely born here, as it does not exist anywhere else. So it’s one truly Okinawan folk performing art.

Although at the core of Eisa are Buddhist songs and chants called “nembutsu” that were introduced to Okinawa by Buddhist monks sometime in late 16th or early 17th century, it has in modern times developed into a form of entertainment that groups of young men and women perform at almost any festive occasion. It has also become a major form of entertainment in the ever-increasing tourism industry. 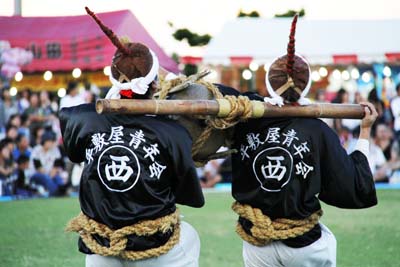 Eisa first took root in communities in the middle part of Okinawa, where newly organized youth groups took the Eisa in their programs in the Meiji-era in.

A big boost for Eisa’s popularity was the introduction of the All Okinawa Eisa Festival and Contest that was first organized in Okinawa City in 1956.

Another Eisa event that added to Eisa’s popularity is Youth Furusato Eisa Festival that has been organized in Naha since 1964.

In the beginning both events were contests, although they eventually became just festival entertainment. Eisa changed to emphasize creativity and group dynamics to fascinate the audiences. As the performances’ popularity grew, the dancers’ costumes grew more colorful and fancy, number of drummers increased and the performance found its way into the resorts that were springing up on the island. 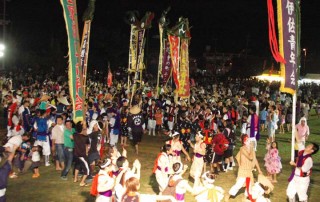 Many Eisa festivals end with kachashi, a dance in which everyone is invited to join.

Currently, youth club based Eisa groups emphasize the traditions, while the Eisa club teams perform often with adapting modern Okinawan pop songs, mixing male and female performers in the team, and adapting fancy and physically demanding moves into their performance.

There are several Eisa festivals on Okinawa on the weekends following the end of August Obon. All are performed in their respective communities and free to attend. Here are two taking place this weekend: 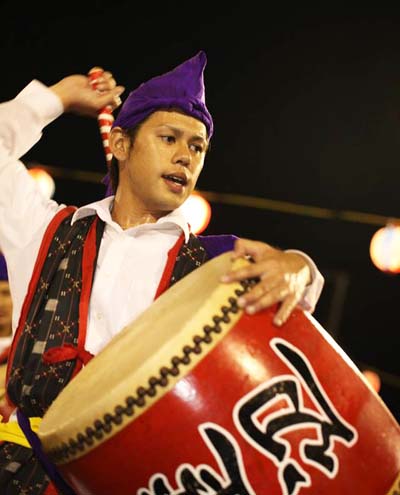 Yomitan Village Youth Association organizes this annual event that is held this Sunday at Yomitan Heiwa-no-Mori Baseball Field from 14:30 to 21:00.

The event is organized with the aim of enhancing the village’s traditional culture and giving a stage for young people in the village to perform. 14 youth groups from different parts of Yomitan will perform at the festival. Every group consists of 20 to 40 members and include the essential funny character, “Chondaraa.” People can watch their performance close from the field or sitting on the stadium seats. Kachashii-dance, in which everyone including the audience can join, and fireworks will close the event. 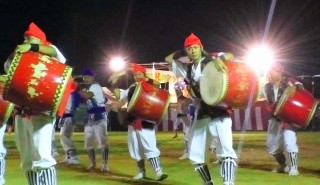 A dozen of youth groups from Ginowan City will perform Eisa for two days at the 19th Ginowan City Youth Eisa Festival on Saturday and Sunday. The festival takes place at Ginowan Shimin Square, an open area in front of Ginowan City Hall at 1-1-1 Nodake, Ginowan City, from 17:00 to 21:00 on both days.

Eisa is not always the same. Every group has its own dance style and attire. Some of them use only small drums called parlankuu white other groups use larger drums to create the beat. To watch the difference in dance and uniforms is one of the fun aspects of any Eisa festival.

The festival ends on both days with a Kachashii dance, in which all participants will join. At the end of the second day of the festival, fireworks will be launched starting at 21:00.

In case of inclement weather, the festival will be held a week later on Sep. 19th and 20th. Admission to the event is free, as is parking nearby.