The Okinawan tug-of-wars were traditionally a ritual of praying for a good harvest and good health for people. 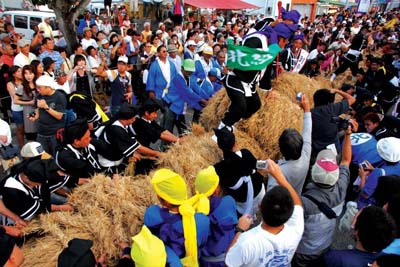 This year’s Itoman Tug-of-War takes place on Sunday, Sep. 27th, when thousands of people pull the 180-meter-long rope made of rice-straw weighing 10 tons, to either north and south. The Itoman Tug-of War had been held around Aug. 15th of the Chinese calendar for ages. In modern times the north has won the contest 35 times against 29 wins of the south. The contest has ended in a draw four times.

The day begins with putting together the rope at the site of the event. A ‘Michijune’ parade takes place before the tug-of-war. 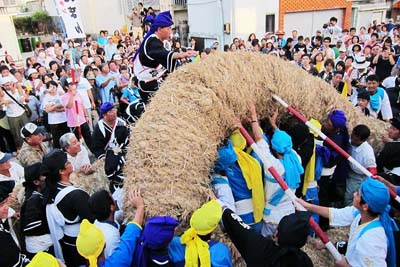 Preparing the rope starts from the morning.

Local people, young and old go through the streets from Itoman Elementary School to Hakugindo dressed in traditional costumes and performing with Ryukyu and Eisa dance on the way and young men carrying ‘Hatagashira’, the tall bamboo poles with a big ornament on top.

The tug-of-war itself starts 17:15 with participants pulling the rope for 30 minutes, after which a winner is decided. The event closing ceremony is at 17:45. A video of the Itoman Tug-of-War is on YouTube at https://www.youtube.com/watch?v=27TygZEXbH0 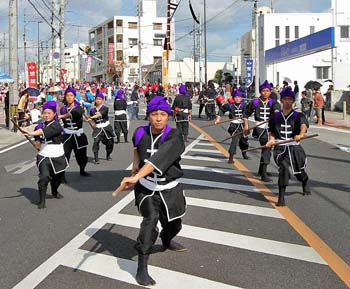 Youth groups march through the town prior to the tug-of-war.

Traffic is always congested in the old center of Itoman City around Itoman Rotary. On the day of the tug-of-war Route 77 between Itoman Elementary School and the Itoman Rotary is closed from 14:00 to 17:00 and Route 331 between Hakugindo and the Rotary is closed all day from 8:30 to 20:30.

The Itoman Rotary is at http://goo.gl/maps/nX4HU