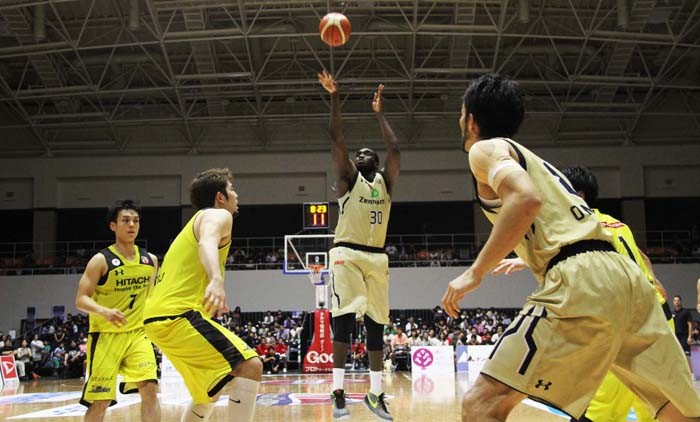 Evan Revenel is the newest acquisition of the Golden Kings.

In the first round of the Island Games the Golden Kings faced Toyota Alvark of the NBL, and lost both games that were played in Okinawa City. This time the venue was the Tomigusuku Shimin Gymnasium, and the first game was played on Saturday. 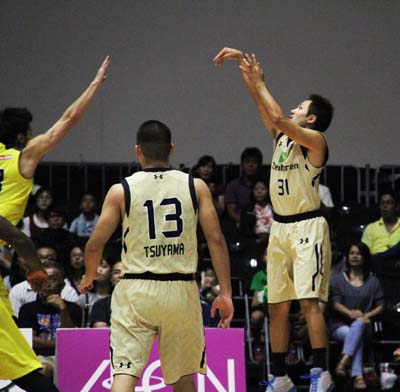 The result on Saturday was that the Kings lost 81-86 to Sun Rockers. The first quarter was promising enough, as the Kings launched an offensive with speed against Sunrockers. Kings’ number #8 Hiromasa Omiya was especially effective and made many rebounds and stemmed the tide when the Kings seemed to lose faith.

In the third quarter the Kings scored steadily and managed to hold to their small lead. However, the Sun Rockers turned the tide thanks to their strong defense in the final fourth quarter, and scored 25 points against the Kings’ 17; 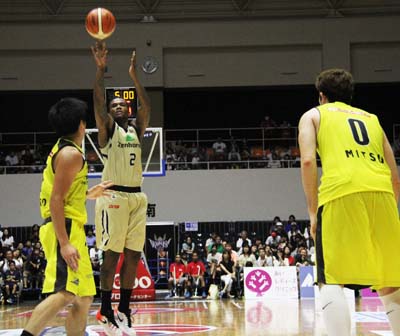 Thus the final score was 86-81 for the Sun Rockers. Ryuichi Kishimoto showed the best performance of the Kings’ team with 24 points and six assists.

After the game, Ryukyu Golden Kings Head Coach Tsutomu Isa regretted the loss but insisted that his team played a good game for the start of the season. “We aim at an up-tempo play, and almost did it in this game. We are looking forward playing the same tomorrow,” Isa said.

On his part, Hitachi Sun Rockers Head Coach Michael Olson was a need for improvements. “Our team played a good game in a fantastic atmosphere. The game was hard and the teams chased each other back and forth. However, we must change how to play our defense. We were able to do that in the fourth quarter, and that was the key to our success,” Olson said.

On Sunday, the venue was the same but the result was not, as the Kings won the game 82-67. 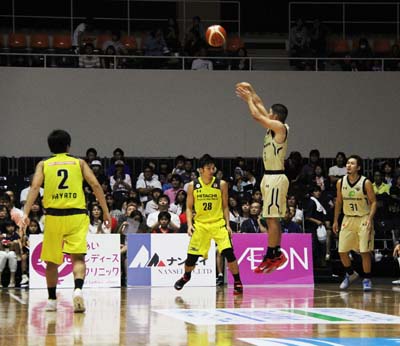 In the first quarter, both teams had trouble scoring, and both teams found it difficult to take the ball to the hoop. The Kings proved to be a little better, and led 16-13 after the low-score first quarter.

In the second quarter, the Sun Rockers managed to get their game together, and outscored the Kings with the help of their strong defense. Finally the Kings had many fouls and the game ended with the Sun Rockers leading 28-29 after the first half of the game.

In the third quarter, Draelon Burns stepped in to work to catch up with the Sun Rockers who also had found new energy. In the fourth quarter, Shuhei Kitagawa proved to have what had been expected from him, and finally pulled the Kings decisively ahead. IN the final quarter, the Kings outscored the Sun Rockers 27-13. 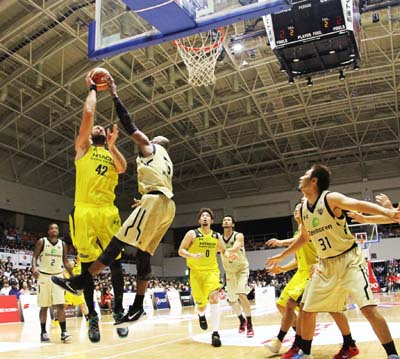 Sun Rockers’ Josh Heytvelt (#42) and King’s backbone Anthony McHenry battle it out at the hoop.

Shuhei Kitagawa and Draelon Burns both scored 25 points in the game. Ryuchi Kishimoto was credited with nine assists.

Head Coach Tsutomu Isa was elated after the win. “It felt so good to have our home crowd to see us win. What we have worked on as a team is taking shape. We have felt we are going to the right direction, and this win process it. On the other hand, we discovered some tuning up that still has to be tackled down,” Isa stated.

Sun Rockers’ Olson admitted that his team made mistakes that the Kings were able to take advantage of. “The Kings beat us mentally. They wanted to win the game more than us. The feeling to never give up was clear in their play. The Kings’ coach has clearly managed to transfer his energy to the players,” Olson said.

The pre-season games were a good indicator on what is coming in the season 2016-2017 when the NBL and TKbj-League are merging into one three-division professional Japanese basketball league called B. League.