The Ryukyu Golden Kings were facing the Shiga Lakestars in a pair of TKbj-League season 2015-16 second round games in Otsu, Shiga Prefecture, where the Kings ruled the Saturday’s match 95-71, but lost narrowly 70-73 on Sunday. 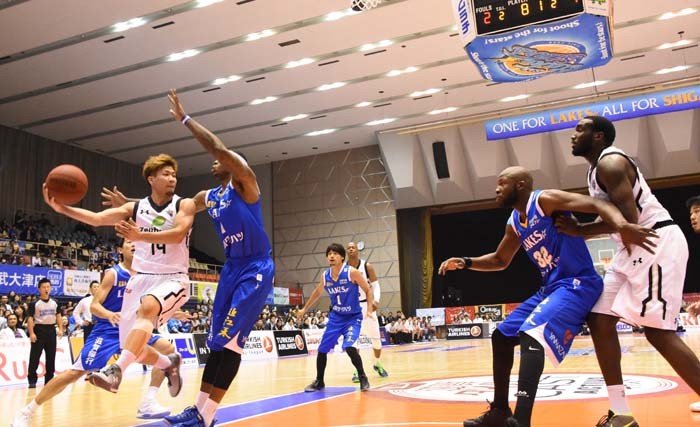 Ryuichi Kishimoto (#14) was the top scorer for the Golden Kings on Sunday.

The start of the Saturday game was slow with both teams struggling to score points until the Kings’ Shuhei Kitagawa entered the game in the middle of the first quarter and changed the flow to the Kings’ advantage.

In the second quarter Shiga managed to tie the score once, but thanks to Evan Ravenel’ strong inside play and Ryuichi Kishimoto’s drive, the game was 45-34 to the Kings at the halfway point.

In he second half, the Golden Kings’ strong offensive worked the rest of the game giving the Kings a solid win. 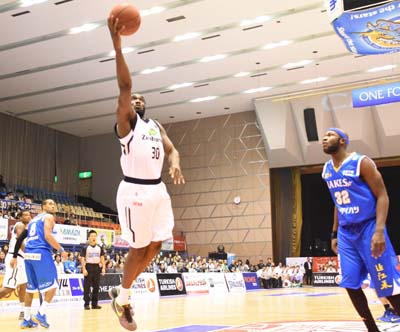 Kings’ Evan Ravenel (#30) readies to score while Julian Mavunga (#32) of Shiga looks on.

After the game, the Golden Kings Head Coach Tutomu Isa said that his team’s patience was the key. “We bore at Shiga’s defense patiently, which led to our success later in the game,” Isa commented.

Shiga’s bench boss Koto Tohyama said his team knows the reason it lost the game. “We let the Kings play their own game moving the ball quickly between the players. Unfortunately we were not able to catch up with them. But as we now know what needs to be done tomorrow, we are ready for the challenge,” Tohyama promised.

That was a promise he was able to keep. Although the Kings were leading 33-23 after the first half of the game, Shiga found the groove after that, and scored steadily from both out and inside while the Kings kept making mistakes.

That was enough to mess up both the offense and defense of the Kings. The efforts of Shiga’s power forward Julian Mayunga (20 points, 16 rebounds) and Yu Okada (19 points) were the key for Shiga’s narrow win with 73 against the Kings’ 70.

After the game Isa admitted that Shiga seemed to have more energy. “It was a tough game. We caught up with Shiga at one point but could not keep up.”

Tohyama also agreed that the game was tough. “That was really tough, but our players fought hard and kept the pressure on to the end. I think we learned something meaningful from both of these games,” Tohyama said.

In their next game, the Kings will face Nara Bambitious in the team’s first home game of the season in Okinawa City, Oct. 17 and 18.  Japan Update offers pair of free tickets to the Golden Kings’ home game on Oct. 17th at Okinawa City Gym.  Apply by email info@japanupdate.com or with a Facebook message, find us at Japan Update, Okinawa, on Facebook.