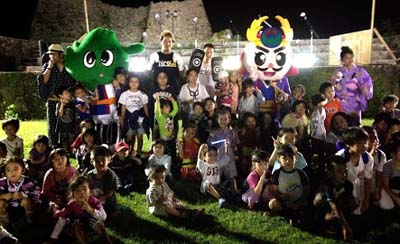 In addition to Eisa, the show includes performances of lion dance (shishimai) and taiko drum groups.

Organizers of the event are members of Nakagusuku and Kitanakagusuku Village youth groups who aim at promoting Nakagusuku Castle Ruin site. The groups have been active working on traditional performing arts and teaching visitors and tourists to play local instruments, like Sanshin and Sanba.

They have asked traditional youth Eisa 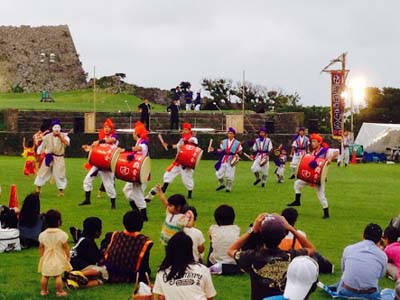 groups involved in other four UNESCO world heritage sites on Okinawa, Nakijin, Zakimi, Katsuren, and Shuri Castle to entertain people and appeal for promotion of not only Nakagusuku Castle Ruins, but the other four castles, too. This festival is the result of their efforts. It takes place every year and the festival is free for everyone to attend.

More than 10 groups, including children’s Eisa group showed their performances in the last year’s festival. In addition to Eisa, the groups showcase lion dances (shishimai) and taiko drum performances.

The event starts at 4:30 p.m. and runs through 9 p.m. at Nakgusuku Castle Ruins Park. Admission to the event is free.