Joint Shop selection of T-shirrs and other items are all personally selected by the owner.

Located in a building with the first floor painted almost entirely black near Jimmy’s grocery store on Highway 58 in Oyama, Ginowan City, a clothing store called ‘JOINT’ is catching the eye of an increasing number of fans with its large selection of cool fashion items ranging from T-shirts to fashion accessories. Throw in a tattoo parlor in the same premises, and you’ve got something unique. The shop is the only one on Okinawa specializing in T-shirts of L.A. Underground brand. Especially, their original design T-shirts are becoming very popular. 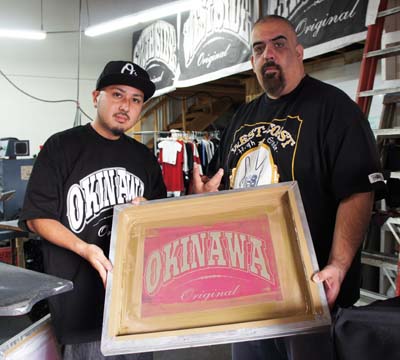 The owner of the store, Takefumi Hanashiro, says the basic idea is to offer products that people can wear for a long time without having to worry about the latest trends.

Hanashiro came up with the idea of his shop gradually. He first ventured off from Okinawa to what he saw greener pastures in the other prefectures of Japan after graduating from a high school. His aim was simply to earn enough money to buy a genuine lowrider car that he had seen in magazines and wanted very much to have.

While living in the mainland, he by chance visited a clothing store selling his favorite apparel. He also realized that he could not purchase his favorite brand clothes on Okinawa, a situation that he was not so happy about, and decided to do something about it. His intuition told him there would be a demand for the kind of fashions he liked, and after returning home to Okinawa, he started to sell T-shirts and other items he liked to his friends and acquaintances, first just on the side. But not before buying a 1986 model Chevrolet he had set to look for to begin with.

The 1986 Chevrolet that Hanashiro wanted so bad is still going strong giving inspiration to his fashion ideas.

Hanashiro’s reputation as a source for cool clothing spread via word-of-mouth, and he sold his first stock of 160 T-shirts much faster than he had expected. As the shirts flew off from his hands, he realized a potential for business.

Hanashiro finally opened his own shop he named ‘JOINT’ in 2006. It became the first shop in Japan to specially order an Okinawa version of an established L.A. brand ‘Westside Original’ T-shirts that he renamed ‘OKINAWA ORIGINAL’. Hanashiro explains the reason he named his shop ‘JOINT’ is that he strongly felt it was important to connect with people when selling T-shirts from hand to hand, which led to opening the store in the first place. 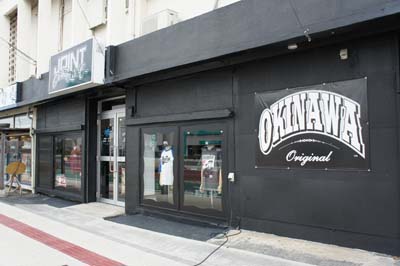 As his business has grown, Hanashiro still relies on his own judgment and only offers products that he himself has confidence in. The mainstay of his business now are T-shirts of his own original designs.

He also started a tattoo business in his shop this May. His two Okinawan artists, Hammer and Misa, have received favorable reputation for their work. They are especially good at black-and-white designs, and also can work creating portraits.

Hanashiro says he would like more off island and foreign customers to have their original Okinawan design tattoos done by local artists who know Okinawa well, and take a memory of Okinawa back to home. JOINT’s new tattoo designs are always on Facebook for anyone to check. (Look for ‘Joint Art Studio Okinawa’ on facebook).

The shop had its 9th anniversary on Aug. 20th, and a big anniversary celebration is planned at club Clutch in Asato, Naha City, for Saturday, Oct. 17th. They party will feature local Okinawan artists, of course, and a guest DJ from outside of the island. That promises to be an event not to miss.

Joint Cloting Store is located at 2-21-2, Oyama, Ginowan City. Their telephone number is 098-898-8582. The clothing store is open every day from noon to 9 p.m. The tattoo side is open same hours but closed on Wednesdays.