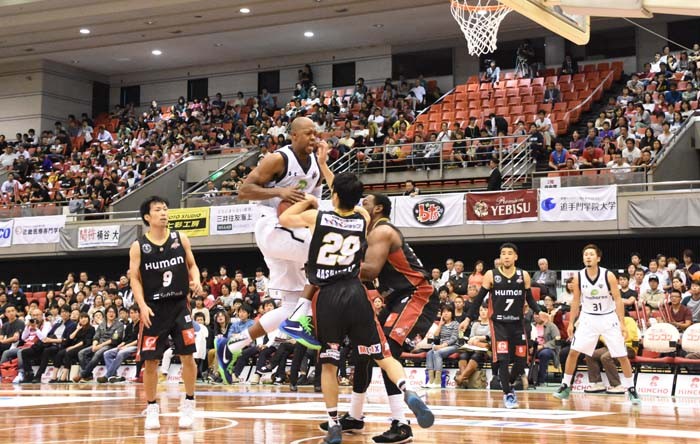 Anthony McHenry took charge in the second quarter, and got his team going (Photos courtesy of Ryukyu Golden Kings).

The Ryukyu Golden Kings faced Osaka Evessa over the pair of weekend on-the-road games ending up with a loss on Saturday, but edging a win in the Sunday game.

Both matches were tough on the Kings as the Evessa head coach is Dai Oketani, a former bench boss of the Kings, and one of Evessa’s most efficient players is Narito Namizato, also a former Ryukyu squad member. 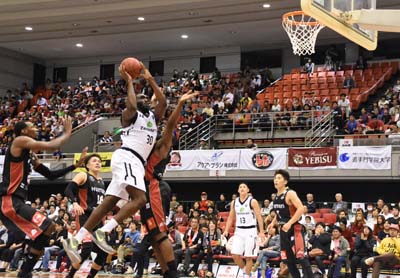 #30 Evan Ravenel, together with team mate Hiromasa Omiya sealed the victory for the Kings in overtime Sunday.

Evessa won the Saturday game 89-72 that was played at Osaka Prefectural Gym in front of an audience of 2,022, although the match was tighter than the numbers tell.

Both teams were scrambling for points at the beginning of the game as neither gave an inch. However, the Kings’ shots missed the hoop more often than Evessa’s. In the second quarter, Osaka’s defense started showing signs of slowing down and the Kings were able to close the score to within one point, but then Namizato scored a buzzer-beating three-pointer, giving Osaka a lead of 43-39 after the first half of the game.

In the third and fourth quarter, the Kings’ Evan Ravenel and Shota Tsuyama led the efforts against Evessa, but the Kings’ turnover after turnover in the fourth quarter allowed Evessa to take the lead, and the Kings eventually lost the game by 17 points.

After the game, the Kings’ Head Coach Tsutomu Isa admitted Osaka is a team to reckon with. “Our less-than-accurate play was revealed in the game. Osaka is a stable and a good team. I realized again that Namizato is a good player who we don’t like to play against.” 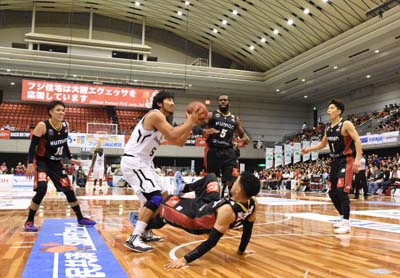 Evessa boss Dai Oketani was not so satisfied with his team, either. “We need to reflect on today’s game even though we won, because we made five turnovers. We can’t win next time if we play like this,” Oketani declared.

Oketani’s words came to haunt him Sunday, as the Kings won on overtime by a narrow margin of 95-92.

Osaka started the game strong while the Kings failed to get into the rhythm because of turnovers, until Anthony McHenry showed why he’s the pillar of the Golden Kings, and took over the lead in the second quarter. Namizato on Osaka side did his best to resist, and the game was even 40-40 at the halfway point.

In the third quarter both teams refused to give an inch and the game was a see-saw of fast attacks and defenses. Evessa was in the slight lead at the end of the last quarter, but Draelon Burns’ made a score-tying shot right at the end of the game, sending the match into extra time.

Finally, Evan Ravenel and Hiromasa Omiya showed great inside plays that sealed the victory for the Kings.

After the game, Isa was happy. “It was good for us to win. Today’s game was similar to yesterday but our players had a talk and got the game back into shape. Namisato and Lawrence Blackledge of Evessa were faster than I thought. In the future games we cannot win Osaka unless we can stop Osaka’s fast attacks.”

Oketani admitted the Kings had played tough. “I deeply regret we couldn’t win the game in spite of forcing Kings in a difficult position. Okinawa played tough through the end,” he admitted.