The Naha Matsuri, including the 45th Naha Giant Tug-of-War, counts its history back about 400 years to the days of the Ryukyu Kingdom. 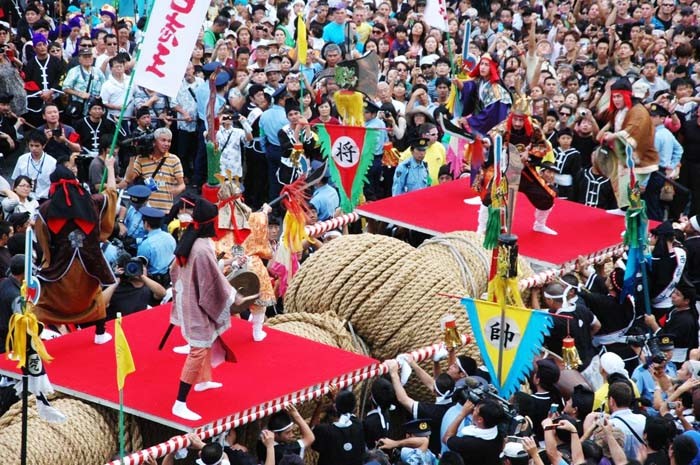 Let the pull begin; the halves of the giant rope have been joined and both sides wait for the sign to star the contest pitting east against west at Naha Giant Tug-of-War.

Naha Festival, the largest festival in the prefecture, can be divided into three specific events; one is the festival in Onoyama Park that includes concerts, karaoke contest and Orion Beer Paradise on all three days from Saturday through Monday, also known as the Sports Day that is a Japanese National Holiday.

Each day has live music performed on two stages from early afternoon to 8 p.m. when each day ends with fireworks. 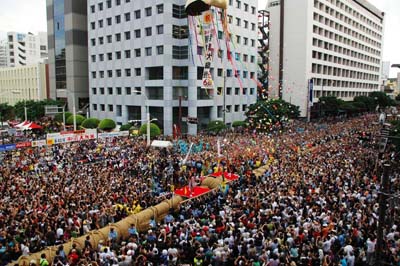 Some 280,000 people attend the tug-of-war every year with 15,000 of them participating in pulling the rope.

Saturday, Oct. 10th features a Citizens’ Parade on Kokusai Street and the open square in front of Palette Kumoji Building. The parade and accompanying performances start at 2 p.m. and continue until 6:30 p.m. The traffic on the Kokusai Street will be stopped from 1:45 to 6:30 p.m.

This year Tokyo Disney Resort provides a special parade performance at SAION Square in Asato. Of course, Mickey Mouse himself and his Disney friends will participate.

On Sunday, a Hatagashira Parade takes place along Kokusai Street from 11:30 a.m. to 2 p.m. when teams of young men show their skills in handling the tall bamboo poles decorated with flags and large ornaments on top.

Although the tug-of-war that is the signature event of the festival was stopped in 1935, it was revived as one of the 50th anniversary events of Naha City in 1971.

Since then the event has grown into the largest traditional cultural event on Okinawa. In 1995 it was officially recognized in the Guinness Book of Records as the largest tug-of-war with the largest straw rope in the world. About 280,000 people visit the event every year, of which about 15,000 can actually take part in the pulling.

Information of Naha Giant Tug-of-War and its history in English is at http://www.naha-otsunahiki.org/en/index.html

Ceremonies by the giant rope on Sunday begin at 2:45 p.m. and the tugging starts an hour later when the halves of the rope are ceremonially joined, and the participants start pulling the 45-ton, 200-meter-long rope. The competition lasts 30 minutes and the winner is the team that manages to move the rope 5 meters to their direction within the time limit. Participation is open to everyone, but those desiring to wrap their hands around the ropes must get there well in advance of the ceremonies.

The event on Highway 58 is free, but parking in the area is not, and can wind up costing several hundred yen, depending on how long you linger in the festival area.