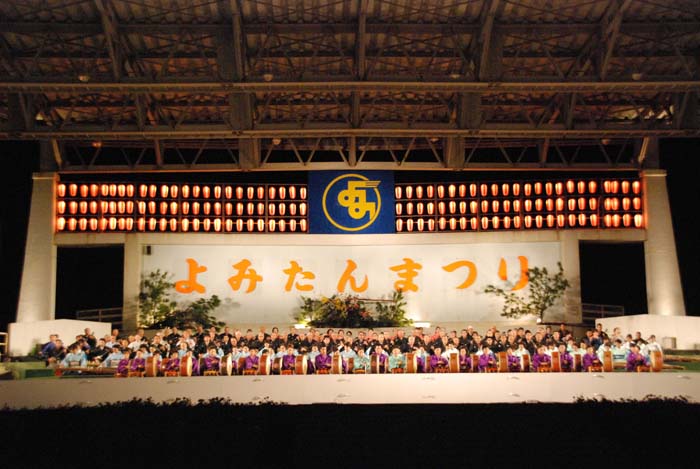 300 players perform music of Akainko in a tribute to the first known composer of sanshin music, who lived in the latter part of the 14th century in Yomitan.

Yomitan Festival is the biggest annual event in Yomitan Village, a municipality that holds the distinction of being the most populous village in the entire nation. The festival is known for its traditional performing arts and focus on local history and culture. 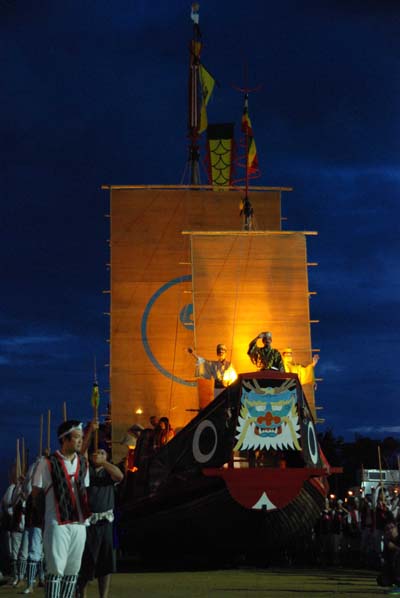 The Shinkousen Show depicts the arrival of a trading ship from China, always a major event in the life of the Ryukyu Kingdom.

The three-day festival that takes place Friday, Saturday and Sunday, Oct. 30 through Nov. 1, features a variety of classical Ryukyu music, traditional performing arts, and Karate and lion dance performances, along with various exhibitions and sale events, in which bonsai, local farm products and nationally famous woven cloth ‘Yuntanza-Hanaui’ are for sale.

There are three main events at the festival. On the first day of the festival, a free large concert takes place with the theme of peace. This year marks the 70th anniversary of the end of the World War ll, and popular artists will perform in a concert dedicated to the world peace.

A rendition of the music of ‘Akainko’ that is eagerly anticipated by local people and tourists alike takes place on the second day of the festival. Akainko is the name of a man who is said to be the earliest composer of sanshin music, and who, according to local folk story, was from Yomitan Village. About 300 local players on stage at one time will perform classical Ryukyu music in his honor. 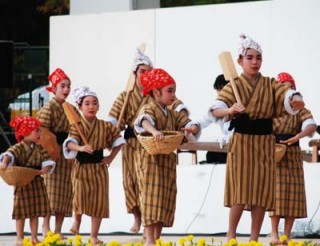 The main event on the final day of the festival is ‘Shinkou-sen’ show. Shinkousen were the trading ships that were used in commerce between the Ryukyu Kingdom and China. The show includes an original performance about a local legendary official named ‘Taiki’ who was from Yomitan Village, and has a reputation as the God of business in Okinawa. In the latter part of the 14th century he was the first person who traveled to China as a delegate from the Ryukyu Kingdom to the Chinese imperial court.

The fireworks will close the event at the end of both days on Saturday and Sunday.

10/30, Friday
Okinawa Dream Peace (music festival)
The gates for the festival open 15:30 and the music starts at 16:00. The venue is Yomitan Village Multipurpose Athletic Park (Sogo Undo Hiroba) at 2901, Aza Zakimi, Yomitan Village. Admission to the concert is free. 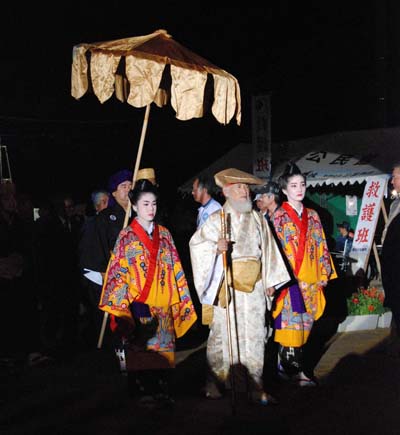 A procession featuring Taiki, the first envoy from the Ryukyu Kingdom to China to initiate trading relationship.