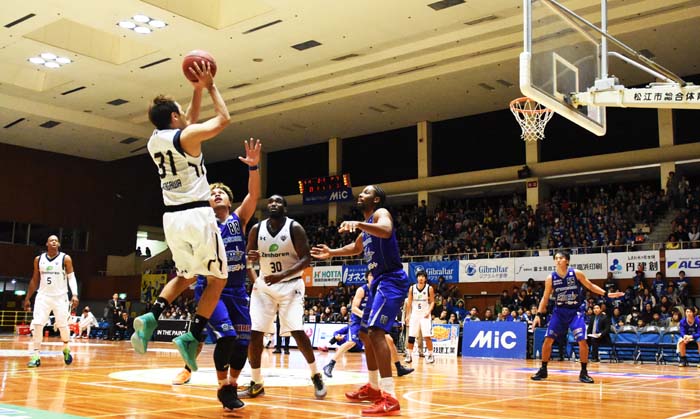 #31 Shuhei Kitagawa aims to score while #30 Evan Ravenel is ready for a rebound. (Photos courtesy of Ryukyu Golden Kings)

The Ryukyu Golden Kings scored the season’s first consecutive wins of a road game against Shimane Susanoo Magic in a pair of games played at Matsue City Comprehensive Gymnasium on Saturday and Sunday. 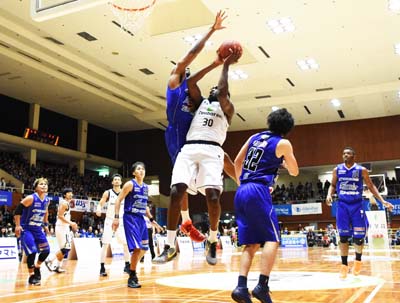 #30 Evan Ravenel was the top scorer for Kings on Sunday.

In the beginning of the first quarter Saturday, the Kings did not make shot so Shimane’s rebound led the game, but Morihisa Yamauchi’s points changed the stream of the match to the Kings. Shimane made mistakes and lost the rhythm of the game. The game stayed close and the Kings led by just one point at the halfway point 40-41.

The Kings trailed in the third quarter until three-pointers by Shuhei Kitagawa and Shigeyuki Kinjo turned the game around. The fourth quarter was the field of Anthony McHenry, whose all-around effort earned him a total of 14 points, 16 rebounds, seven assists and three blocks. Kitagawa and Kinjo contributed each 16 points to seal the victory for Kings.

After the game, the Kings’ Head Coach Tsutomu Isa acknowledged that, in spite of the win, the game had not been easy for his team. “It’s a difficult game for us every time for us on Shimane’s home court. Shimane fans are always energetic to cheer them up, so we were caught up in the emotion of the moment,” Isa said. 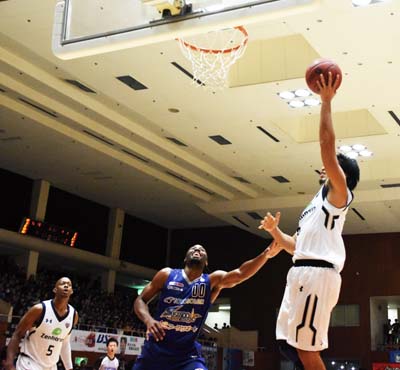 Shigeyuki Kinjo was a key player in Sunday’s game.

On Sunday, Evan Ravenel was the stop scorer for the Kings in an otherwise los-score game. Ravenel collected 18 points and nine rebounds, while Kinjo scored 12 points.

In the first half of the game, both teams could not ride a wave of the game, and the scoring stayed low. The Kings scored points with Kinjo’s and Ravenel’s run-and-gun offense and from inside. Shimane had to make a difficult shots and continued turnovers.

In the latter half of the game much of the same continued, as both teams struggled to improve scores. Shimane was catching up with the Kings although the Kings managed to keep a slight lead with Kishimoto’s three-point shot. In the fourth quarter, Shimane picked up stream and the game was getting close. However, Kinjo succeeded to throw a three-point shot in a key situation and the Kings won the game.

After the game, King’s coach Isa said that it was had a big meaning for the team. “It’s a big thing that we won twice in a row in Shimane’s home game. This season we had not won two straight games on the road in Osaka and Shiga Prefectures, so we came here to win two straight games by any means. But we only scored 59 points. Our players need to work out a way for next games score higher.”

Susanoo Magic coach Katsuhisa Michael said that his team lost because of weak defense. “We had chance to win the game because is became a low score game but in the end our defense broke down. Our aim is to concentrate on controlling the game with our defense whenever we are facing a stronger team.”