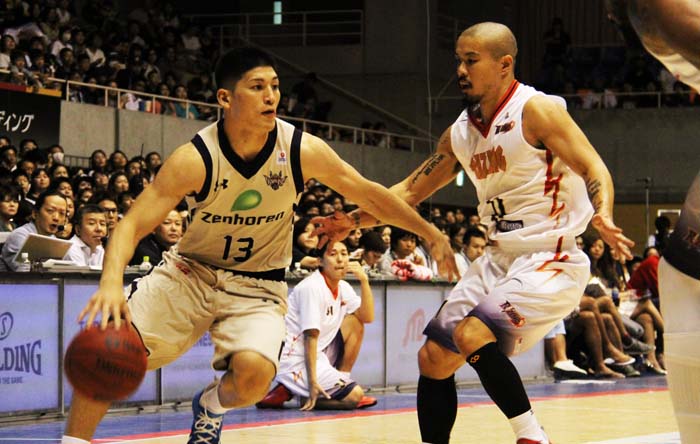 The Ryukyu Golden Kings scored their fourth and fifth straight wins in their weekend home game against Rizing Fukuoka played at Okinawa City Gymnasium. The Kings won the Saturday game 87-67 in front of 3,021 fans. The score on Sunday was 85-80 with 2,804 people in audience.. 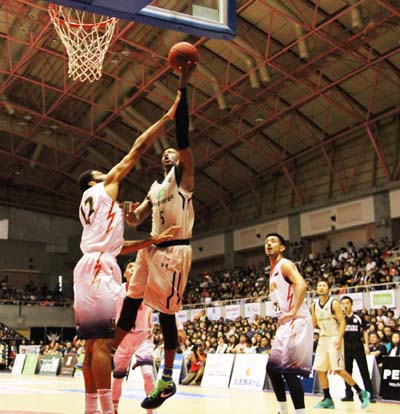 McHenry (#5) had strong showing on both days.

At the start of Saturdays game, Shigeyuki Kinjo, Ryuichi Kishimoto and Morihisa Yamauchi made shots from inside by breaking Fukuoka’s defense. The Kings’ steady play continued in the second quarter centered on the offense initiated by Anthony McHenry. However, at the end of the second quarter things started going south for the Kings as Fukuoka was able to turn the game with shots from both in and outside.

Fukuoka continued piling up points in the third quarter mainly thanks to their foreign players. At one point, the Kings trailed Fukuoka by `10 points, and would have been left behind even more had it not been for Draelon Burns who continued to score.

In the fourth quarter the Kings turned the game by Kitagawa’s three point shot, and Fukuoka simply ran out of steam. The Kings outscored Fukuoka 28 to 6 and the game was over. 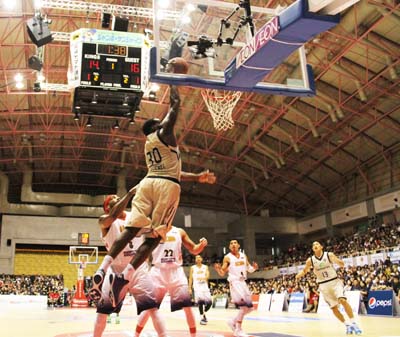 #30 Evan Ravenel was the top scorer on both days.

After the game, Head Coach Tsutomu Isa praised his team. “We are coming close to our ideal basketball. Fukuoka’s lead in the beginning of the game was due to my mistake in dealing the cards. It was my fault not the players. Our players did exactly what they needed to do, and then let it loose when Fukuoka’s players got tired in the fourth quarter,” Isa said.

Tomohiro Moriyama, the Head Coach of Fukuoka Rizing admitted that his team could not keep up. “Okinawa’s pressure increased towards the end and we could not respond. In addition, our shooters’ 3-point shot success rate was low throughout the game,” he admitted.

The game on Sunday was much more even by the numbers, although the Kings stayed on top at the end. At halfway point the Kings’ lead was only one point at 38-37. 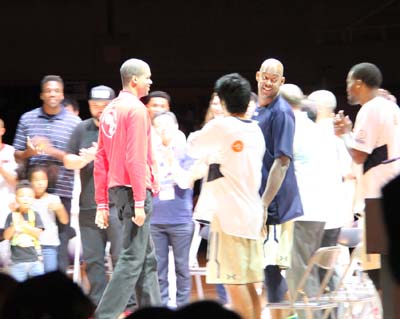 At one point in the third quarter the Kings were able to pull ahead by 10 points but Fukuoka clawed back, until the Kings were able to make a little distance by Draelon Burn’s three-pointer. At the end, Fukuoka’s foreign players staged a comeback attempt, but with Kinjo’s quick offense, the Kings held to the lead and won the game.

Evan Ravenel, was again the top scorer with 23 points and eight rebounds. Draelon Burns had 12 points and five rebounds. Kinjo and Kishimoto both made 11 points.

After the game, the Kings head coach was satisfied with the matches as, “I could see for the first time this season that the players have become mentally stronger.” But he added that his players were not able to grab a chance when it came to score. “We failed to make easy shots creating a difficult situation by ourselves. We lacked in our scoring ability,” he said.

Fukuoka’s Moriyama said his team performed as a day before. “It was the same game as yesterday, but at lease we could bring the score closer. It’s good to know that we can tie the score against a strong team,” he concluded.