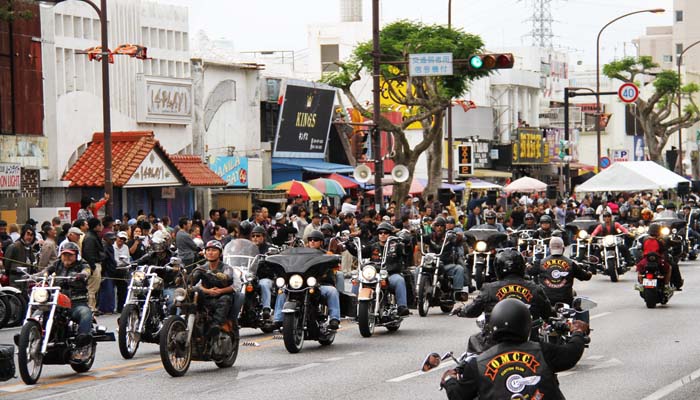 Some 300 Harley Davidson motorcycles are expected to take part in the largest motorcycle garthering on Okinawa, Sunday afternoon.

Okinawa City takes pride of being the most international city in the prefecture as the home to people from more than 30 countries. To highlight this status, the Okinawa City International Carnival and the Gate 2 Street Festival will take place this Saturday and Sunday.

The weekend-long event is expected to draw many thousands of visitors, and the city fathers readily take pride in their event. Okinawa City is, at least in their minds, the most suitable place in the world for all internationally flavored, participation-oriented events, and that’s what the weekend promises: music, entertainment, sports and sightseeing.

Although the rope is smaller, the tug-of-war is as intense as in Naha.

The rope used for the tug-of-war is a smaller version of the big one that put Naha City in the Guinness Book of Records, but Okinawa City locals say theirs at 18:00 is just as much fun. The tug of war is open to all, although small children should be kept clear of the rope for their safety. 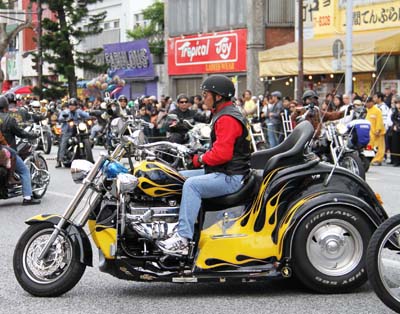 The Harley Parade features many quite impressive pieces of engineering.

The Gate 2 Festival takes place on Sunday, with the rumbling—and somewhat loud—entry of over 300 Harley Davidson motorcycles on the street, along with sports cars. The motorcycle parade starts at 14:00. Local and Taiwanese bands, street dance and drum performances, a Taiwanese acrobatic group performance and arm wrestling contest fill the street on several outdoor stages.

On both days there will be dozens of food vendors and souvenir stands, each offering a specialty unique to Okinawa, America or other countries. There will be plenty of games and activities for children as well.

Organizers emphasize that there will be traffic restrictions during the weekend. They also encourage people to park their vehicles a distance away, because parking in the immediate Chuo Park and Gate 2 Street areas is very limited. All of Gate 2 Street will be closed both days 10:00 ~ 21:00. Saturday one lane each way on Route 330 is closed from 14:00 to 16:00, as well as part of Culture Center Street from 13:00 to 16:00.