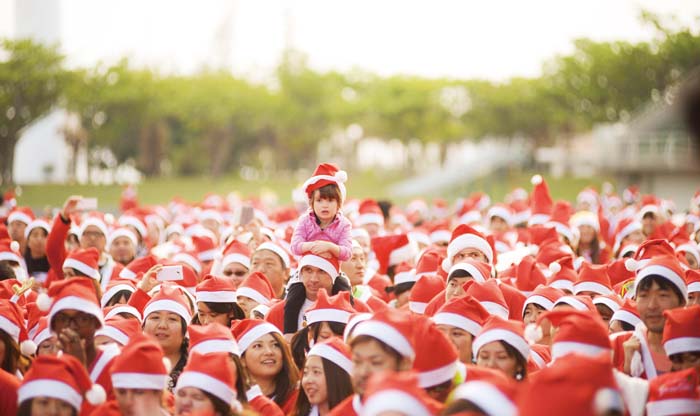 Runners of all ages are welcome; running is optional, riding on dad’s shoulders is OK.

A group of runners in U.K. came up with an idea to combine the spirit of Christmas with their beloved hobby as a means to raise funds for a worthwhile cause. After some more thought they decided that nothing would be more appropriate for Christmas than Santa Claus, so they decided that they would run for their cause dressed as Santas, and as they say, the rest is history.

The idea caught up and has now been adopted almost everywhere in the world. The idea is simple. People pays a fee to run or walk a short course dressed as Santas, and the proceeds are donated to buy Christmas gifts to sick children who have to spend their Christmas in local hospitals. 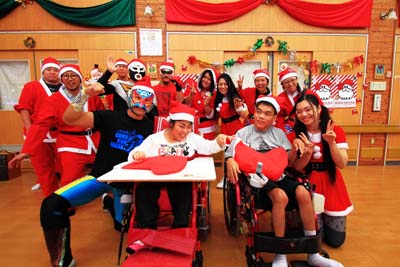 Ryukyu Dragons pro-wrestlers were among supporters of last year’s run.

Organizers of the Okinawa Santa Run are inviting runners to join in the second Okinawa Santa Run on Dec. 5th. The start and finish line of the run is at Chatan Fisharena next to Chatan Hilton Hotel. The run starts at 13:00 with the registration beginning an hour earlier. The two-mile course runs along the Mihama shoreline to the Vessel Hotel and back. Those who don’t like to run can walk and enjoy the ocean view.

The trademark of the event is that everyone walks or runs dressed up as a Santa Claus. Registration to participate costs ¥3,000 for adults, ¥2,000 for students, and ¥1,000 for elementary school students and younger. The entry fee includes a complete Santa costume for adults, while a child’s ticket includes a Santa cap. The Santa costumes are uniform size that fits everyone, and participants can keep the costume after the run. Tickets are available at Family Mart’s e+ ticket service.

Proceeds of the Okinawa Santa Run will provide Christmas presents to children who will be spending their Christmas in local hospitals on Okinawa, and part of the proceeds, of course, to cover the cost of the Santa costume.

Organizers say everyone can participate, including families, kids, and young children in strollers. Even pets are invited. Invite your friends, your neighbors, your work buddies, and head out to Chatan to support a super charity event. And don’t forget your camera, and don’t forget to post those pics to let everyone you know to know how great an event it is: Let’s be Santa for children!

An English language website of the event is at http://www.okinawa-santa-run.com/e/