The federation was founded Dec. 8th, 1990. This year thus marks the 25th anniversary of the organization that was founded in order to unify different factions of Okinawa Karate that were almost fallen into a war against each other, mostly over disputers over what could be considered the original, and pure form of Karate. 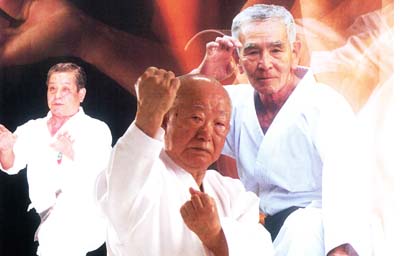 One thing that everyone could agree was that the Okinawan Karate had a long history, and its basic philosophy of “strengthening one’s body and improving one’s technical and physical skills including learning the spirit of civility and educating man’s mind.”

For the past 25 years the federation has worked tirelessly to unify and promote Okinawan Karate, and make Okinawa, the birthplace of Karate, the undisputed Mecca of Karate that its 80 million practitioners in more than 180 countries all over the world can look up to for inspiration and guidance.

Thanks to the efforts of the federation, Okinawan Karate is now recognized as an Intangible Cultural Asset. It also has its own dedicated “Karate Day.” The work is still going on to build an official Karate Hall on Okinawa. Karate was also awarded the status of a competitive sport at the 2020 Tokyo Olympics.

Among its programs, the 25th Anniversary Ceremony includes the Okinawan Traditional Karate Martial Arts International Exchange Performance, an international seminar of traditional Okinawa Karate titled “The Mecca of Karate,” and other seminars related to Karate and its 1,200 years of history.

The Okinawan Traditional Karate Martial Arts International Exchange Performance on Nov. 23rd aims to promote the way of Karate back to the source in Okinawa from all over the world. This is a great opportunity to share and touch the spirit and “Kata” of genuine traditional martial arts.

The performance takes place at Okinawa City Civic Hall at 14:00 with doors opening an hour earlier. Tickets to the event cost ¥1,000 and are available at most Karate dojos. Both Okinawan and overseas teams are scheduled to perform. It also includes dissemination and demonstrations of the three major styles of traditional Okinawan Karate, performances by youth groups and, as the highlight of the program, performances by Okinawan Karate masters regarded as Living National Treasures.