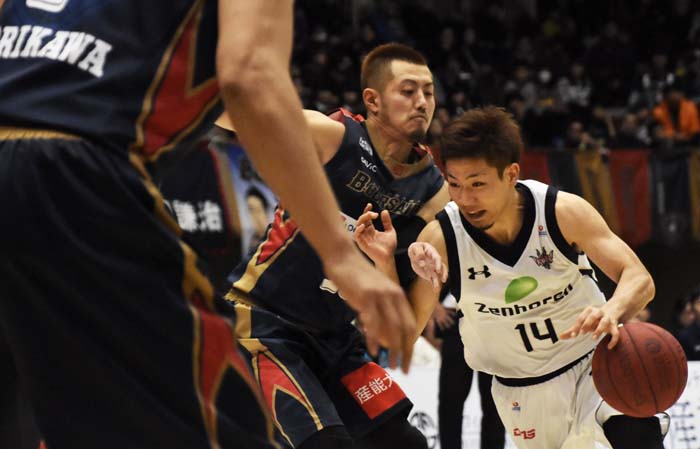 Ryuichi Kishimoto in a tight place.

In the year’s last series of matches, the Ryukyu Golden Kings, playing on the road, presented a Christmas gift to their fans by winning both contests against Yokohama B-Corsairs. The score was 90-74 in the Christmas Day game, and 92-83 on Saturday.

The double win also means that the Kings returned to the club with Kyoto Hannaryz, Hamamatsu Higashimikawa Phoenix and Shimane Susanoo Magic for the lead among Western Conference teams. 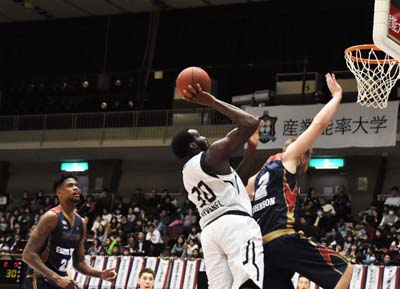 Evan Ravenel sealed the victory to the Kings in Saturday’s game.

The game on Christmas night saw Shuhei Kitagawa perform his best game of the season so far. In the course of the game he shot five 3-pointers scoring 21 points in total in the match that was played at Yokohama City Culture Gymnasium in front of 2,894 spectators.

The Kings took control of the game from the start overwhelming Yokohama with both offense and defense. In the fourth quarter towards the end of the game, Yokohama at times found their wind, but the Kings’ lead was never in question.

Kings’ Head Coach Tsutomu Isa dedicated the win to the successful defense from the start. “Our defense worked beautifully from the beginning and that led to a good offense. Yokohama has a veteran guard crew and they play steady. So we were careful about not burying ourselves in their play. Our first five players had fantastic day and they helped us to get to a good start,” Isa said. 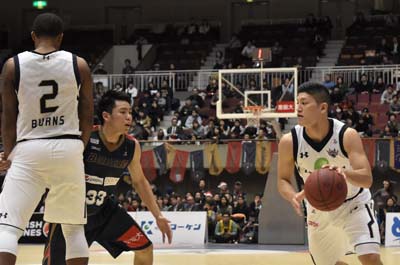 Shota Tsuyama is ready to pass the ball to Draelon Burns.

Yokohama Head Coach Taketo Aoki gave it to Okinawa but also saw a little light at the end of the game. “Okinawa showed a great performance. It was a tough game for us, however, we were able to catch up with the game in the end,” Aoki concluded.

On Saturday Evan Ravenel and Shuhei Kitagawa scored 22 points each as the Kings completed their series sweep. 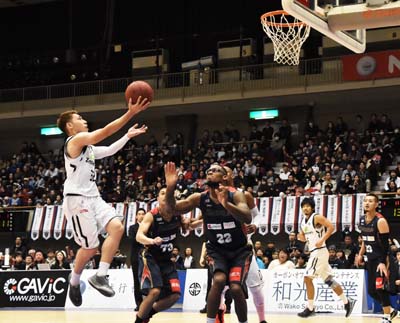 The Golden Kings had a 12-point lead at one point in the third quarter but Yokohama launched a tough attack and closed in within four points. However Kinjo again came to the rescue, scored with his run-and-gun offense and that was enough to wake up the Kings, although they lost the quarter 22-25.

In the last quarter of the game, thanks to furious cheering from boosters, Yokohama cut the lead again and again, but each time the Kings were able to match. About 5 minutes before the game finish, Yokohama cut the Kings’ lead to three points, but Evan Ravenel’s free throws sealed the victory to the Kings.

After the game, Isa was happy. “It was a big thing for us to win two games in a row on the road. Yokohama’s energy level was high in the beginning of the game, and although we were careful about Yokohama’s play, we were caught up with the emotions of the audience for a moment. Our players from the bench, however, kept their cool and set the game for us to win,” Isa mused.

Yokohama coach Aoki regretted that his team did not have the power to win the game. “Our players played hard, and did a good job catching up with the Kings. I think we had a chance to win, but were not able to squeeze a little more. We regret that we could not win the game and lost two times in a row in our last game of the year on our home court. However, I think we gained many lessons, so I’m confident we can step up our game next year,” Aoki stated.