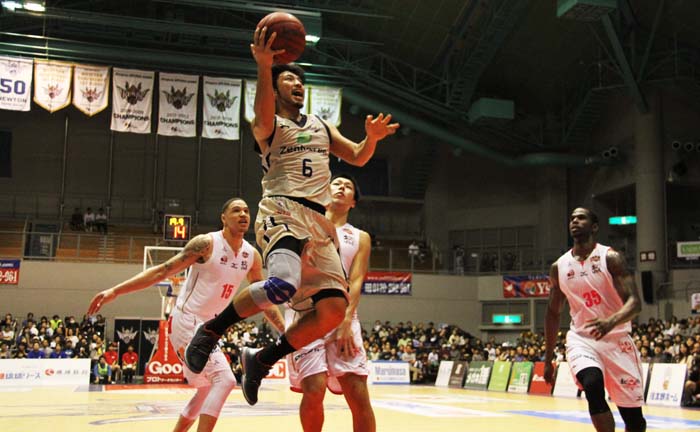 The Ryukyu Golden Kings made mince meat of Akita Happinets on Saturday in front of a home court crowd of 2,994 winning the game 99-63.

Unfortunately their momentum did not last, as Akita avenged the Saturday’s loss and won the second game 80-77. 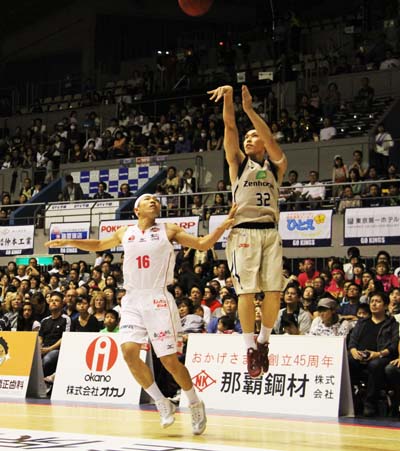 The Kings got into a slow start Saturday, and allowed Akita a 10-point lead at one point of the first quarter. However, Ryukyu defense shaped up in the middle of the quarter and the game turned around.

IN the second quarter the Kings outscored the Happinets 25 to 9 and led the game 50-33 at the halfway point never losing the lead since.

Kings’ Head Coach Tsutomu Isa said after the game that the loss of the team’s previous home game was the driving factor behind his team’s performance. “We fought with pride since we lost our last home game. Our start was not so good, but thanks to members on bench, we got our pace back.”

Happinets’ Head Coach Makoto Hasegawa admitted that his team could not get their act together. “We completely lost today. We could not do anything in the end of the first quarter because Kings put pressure on our weak points. Even though we had the highest number of turnovers ever. Okinawa’s defense was pretty good, so it looks to me that Okinawa has made a study of it.” 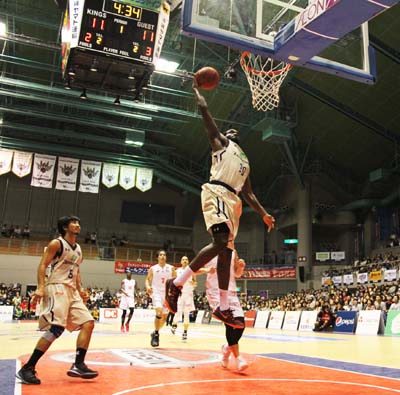 It was another story on Sunday as the Kings kept piling up one mistake after another from the second quarter on, although they managed to hold on to the lead until the halfway point.

From the third quarter on, Akita turned up the steam on their offense as the Kings succumbed repeatedly to turnovers trailing their opponent by more than 10 points.

In the fourth quarter, Evan Ravenel showed his mettle in inside play, and the Kings caught up with Akita. However, mistakes by the Kings continued and the team narrowly missed the game losing 77-80 in the end.

2,588 people came to watch the game on Sunday at Ginowan Gym. The game was also shown live on local RBC TV channel.

Isa blamed his team’s loss mostly on their inability to carry on the flow of the game well. “The beginning of the first half of the game was not so bad and actually better than yesterday. But then we let Akita energize. We did not lose because of mistakes and shots in the end of the game but we could not carry forward the game well. And the ball was mostly not inside but outside in the third quarter. We caught up with Akita in the fourth quarter, but we cannot win if we play like this,” Isa lamented.

Akita’s Hasegawa said the referee was bad. “We broke down by ourselves against the referee’s mistakes yesterday. It is hard for us to play under a situation that a referee from Okinawa blows the whistle in their home game. However, our players held on and did well today. They were mentally stronger than yesterday, and could concentrate on our play. I do not think the Kings can continue to play as they intend because the referee will change in the playoffs.”