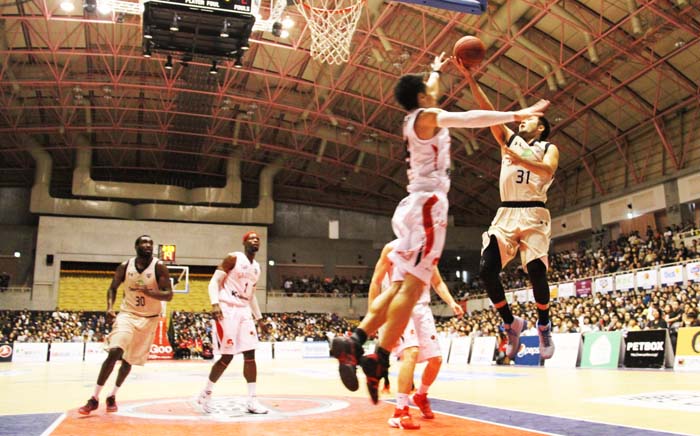 Shuhei Kitagawa (#31) was one of the key players for the King on both days.

The Ryukyu Golden Kings faced Toyama Grouses last weekend at Okinawa City Gym, and assured both themselves and their fans that they still have what it takes to win. 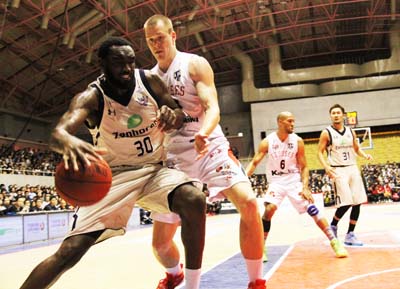 Evan Ravenel (#30) was at his best against Toyama.

The Saturday’s game did not start good. The Kings could not pick up the pace from the start, and failed to score, piled seven consecutive turnovers.

In the second quarter, Toyama inflicted severe pain on the home squad defense gaining a 15-point lead. But the Kings redeemed themselves triggering Toyama to make several mistakes. Shuhei Kitagawa and Anthony McHenry then showed how it’s done and turned the game around.

Starting from the third quarter, the Kings’ offense got smoother, and with the efforts of Evan Ravenel and Draelon Burns completed the game with a comfortable margin.

King’s Head Coach Tsutomu Isa admitted Toyama had decided the pace at the start of the game. “We had to play at Toyama’s pace in the first quarter, but then succeeded in switching the game to our pace from the second. The stream changed to our favor little by little, and our defense started working. In the fourth quarter, we could run through the game,” Isa explained. 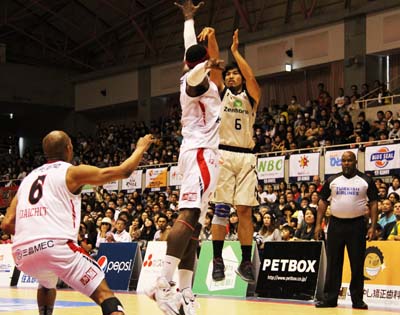 Bobby Nash, the Head Coach of Toyama admitted that his team could not match the Kings. “We played a good play in part, but could not take rebounds, make assists or eliminate turnovers. Okinawa played a good game to the end and won,” Nash said..

The game on Sunday began the same way as Saturday with Okinawa taking it’s time before the pieces started falling together. The Kings continuously made mistakes and had eight turnovers in the fist quarter. But Kitagawa held onto Toyama with shots from out side.

After the second quarter, the Kings were still trailing 33-40 despite of the best efforts of Draelon Burns.

The game turned around in the third quarter with Ryuichi Kishimoto’s, Burns’ and Kitagawa’s three point shots giving the Kings an edge. 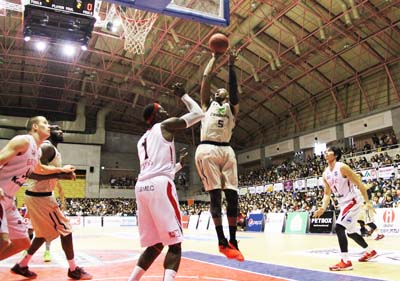 Anthony McHenry (#5) is the anchor of the team.

In the fourth quarter, the Kings kept up the steam and held on to the lead.

Head Coach Isa was a happy man after the game. “I’m glad we won the game and I am sure our fans were happy. Although we made lots of mistakes in the first quarter, our players had the best game in weeks. Our active play led to the big fourth quarter.”

Bobby Nash had no excuses. “We really regret. Okinawa showed a very good play in the last quarter,” he admitted.

Takanori Goya of Toyama Grouses, who is a former member of the Kings, and played on Okinawa for the first time in about five years, said after the game, “Many of my relatives and friends had come to see the game, and I was happy to be able to play in my home town. But, I really regret we lost the game because I wanted to win badly. I’m better than last year. And wanted to show it.”