Mori Trust Co., Ltd,, one of the largest real estate developers in Japan, announced that they have obtained a 335,131-square-meter property on Sesoko Island, Motobu Town, from Sesoko Beach Resort Co.

This is the first time for the Tokyo-based Mori Trust Co. to do business in Okinawa. The land is the largest lot earmarked for a hotel development on the island. 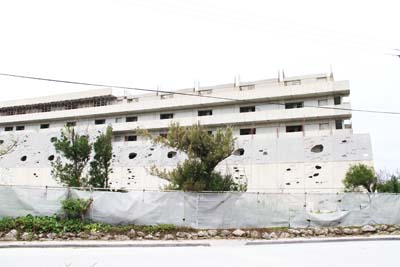 The hotel on Sesoko Island was partially built but the construction was halted as the parent company went bankrupt in 2008.

Mori Trust officials say the company aims at opening a long-stay resort facility on the site by 2020. The purchase price for the property has not been disclosed.

Urban Design System Co. which is now defunct, had planned to develop a large-scale luxury resort hotel with 360 guest rooms costing ¥70,000 yen per night on the property at an estimated cost of ¥30 billion. Sesoko Beach Resort Co. was supposed to manage the facility.
However, because of the parent companies went bankrupt during financial crisis of 2008, the construction on the property stopped. According to Mori Trust Co., the utilization of the existing facilities is under consideration.