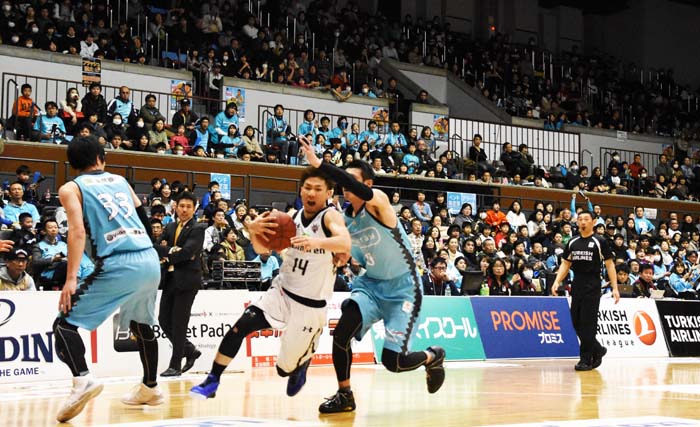 Ryuichi Kishimoto #14 was on fire against Kyoto on Saturday.

The game was pure ecstasy to Kings’ Ryuichi Kishimoto who piled up 25 points in the game that saw the Kings lead by 19 points at one point in the third quarter. Evan Ravenel also had a good game with a rally of 17 points. Draelon Buns and veteran Anthony McHenry scored 12 points each. 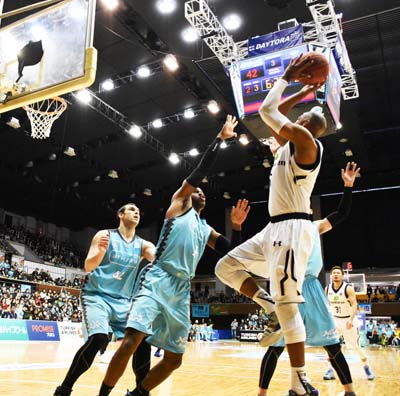 The result of the game was in no doubt at any time during the game, although Kyoto was catching up with Kings from the end of the third quarter. However, the Kings held on to their lead to the final buzzer.

The Kings’ head coach Tsutomu Isa admitted that he was a little surprised for the victory. “The entire tea, fought against Kyoto with determination. It was good to win against Kyoto, against which we had lost two times in a row. But it was surprising that the (Western Conference) first place team was hustling so much,” Isa wondered after the game.

Kyoto’s head coach Honoo Hamaguchi agreed. “We ran into trouble with too many fouls, and made the game tough to ourselves. We have one more day tomorrow, so must play more carefully.”

And so they did. The Golden Kings lost the game 71-78 and dropped to the third place in the conference.

In the first half of the game, the Kings took the lead in the beginning but was tossed aside by Kyoto’s quick passes, and Kyoto finally turned the game in the second quarter.

Although both teams collected several fouls in the final quarter, Kyoto managed to hang on to their lead and won the game.

After the game, Isa said his team collected too many fouls. “Today’s game was completely different from yesterday. Our players collected a lot of fouls, so we could not play freely.”

Kyoto’s Hamaguchi said that his team got to play the way they wanted. “We did play hard defense that we always aim at. This was what we would like to keep doing.”