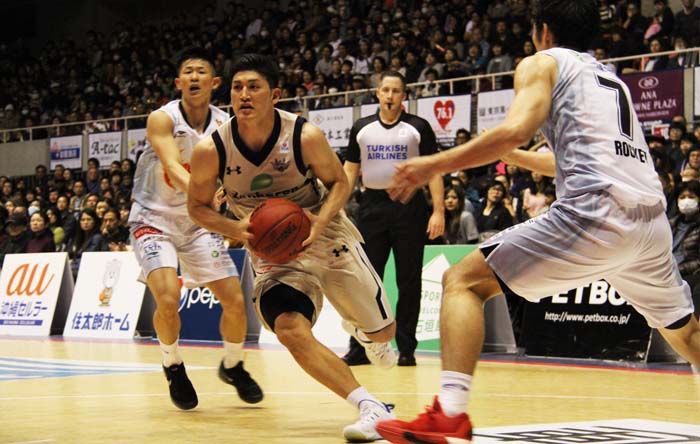 3,746 people were in audience on Saturday to witness the Ryukyu Golden Kings to win handsomely 101-80 on their home turf against visiting Oita-Ehime Heat Devils. However, the home team’s joy was short lived as Oita reversed the roles on Sunday, and the Kings lost 81-88 resulting in a series split. 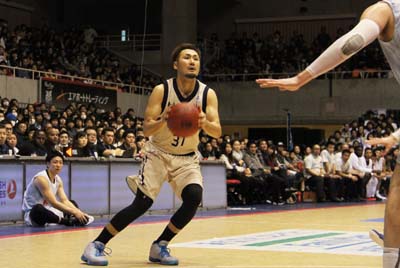 Shuhei Kitagawa presented a mighty effort to ensure the Kings’ victory on Saturday.

In the second half of the game the Devils bedeviled the Kings’ efforts with their strong defense, and Oita-Ehime cut the lead. But then in the fourth quarter Shuhei Kitagawa exploded and helped the hosts to pull away from their guests.

Kings’ Head Coach Tsutomu Isa admitted that his team was not up to par in the beginning of the game. “We did not play the way we expected until the third quarter. But then our players started moving, and we were able to move the ball the way we wanted in the fourth quarter.” Isa said. He added that he was disappointed that the opponent had been able to score so high. “It was not good at all that we gave them 80 points. They were faster than we expected and we allowed them to score,” he lamented. 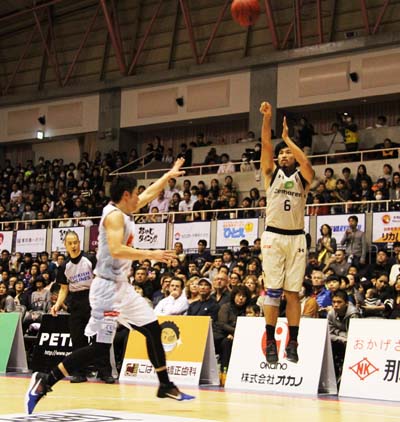 Shigeyuki Kinjo (#6) was reliable as always.

Despite of his team’s loss, Heat Devils Head Coach Ryuji Kawai was optimistic. “We were planning to catch up with the Kings with a single-digit gap in the third quarter, and we were doing well. But we lost for reasons other than tactical plans in the fourth quarter. I believe we can step up our game if we can fix the weaknesses we had in the fourth quarter. We learned something today,” Kawai mused.

The lesson obviously hit home by Sunday. The Kings led by two points after the first quarter, but were able to score only 17 points in the second.

After the first half of the game, Oita-Ehime closed in with drives and three-point shots, and finally turned the game around for good while the Kings could score only 12 points in he final quarter. The Kings efforts also were stymied by several fouls towards the end of the game and, in spite of a hard push, failed to catch up with Oita-Ehime.

After the game, Isa admitted the Oita-Ehime beat his team mentally. “We kept playing frustrated, as Oita-Ehime overwhelmed us mentally. For example, they showed more desire for the ball and consciousness for defense. If we are not hungry, we can’t win against anyone. We need to be mentally tougher and stronger,” Isa stated.

On his part, Oita-Ehime’s Kawai was very happy. “Our players responded to my demands and fulfilled their responsibilities. I am proud of my players. We believe that we will be a central figure in the second half of the season. It was a big thing we won our game on the road in Okinawa,” Kawai said after the game.