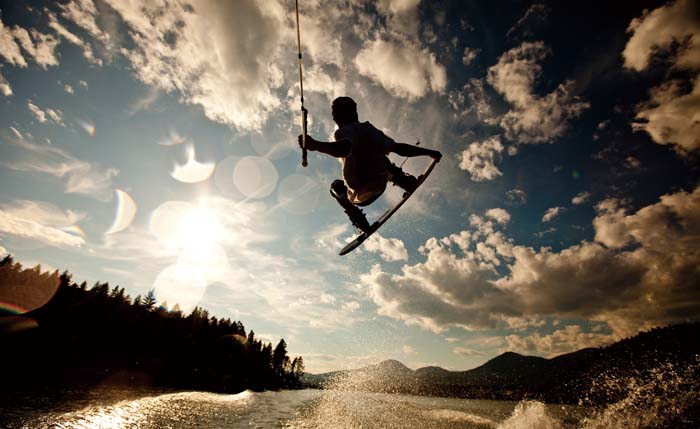 Wakeboard competitors are scheduled to show their skills at Fisherina on Saturday.

Wakeboarding contest is a rather unknown sport to Okinawa, although many resorts and beaches offer wakeboarding to visitors willing to try. But there are a growing group of enthusiasts on the island who usually can be seen practicing on various sheltered bays and harbor areas, mostly on weekends.

The sport is about the get a boost as the 1st Chatan Cup wakeboard competition brings some 35 wakeboarders to the bay in front of the Fisherina ports in Chatan this Saturday. Admission to the event is free, and plenty of free parking is available in the area between Hilton Okinawa Chatan Resort and Fisherina.

Fisherina has an ambitious aim to become the Mecca of watersports on Okinawa. The wakeboarding contest starts at 10:00 and the participants make runs in several categories in front of the Fisherina making back flips and jumps utilizing the wake of the towing motorboat as a ramp.

Prizes are awarded in several categories. There’s also an exhibition event in between the race runs starting at noon.

Wakeboarding arose in Australia, New Zealand and the U.S. in late 80’s. The first wakeboards in Australis and New Zealand were short surfboards specifically designed for towing. The sport got a boost when an American named Howard Jacobs got an idea to mount two windsurfing foot straps on the board that allowed him to do jumps and backflips while towed behind a motorboat on a river in Florida. Wakeboarding was added as a competitive sport to the X Games in 2005.

Making the boards flotating made the start easier and allowed the sport to be introduced to resorts for wider public to enjoy. Some of hotels and resorts on Okinawa have introduced wakeboarding in their water sport activities regimen, and anyone willing to give it a try is welcome. It’s said anyone can master the basics of wakeboarding in 15 minutes. So come to take a look at Fisherina on Saturday, and if you like what you see, give it a try this summer?