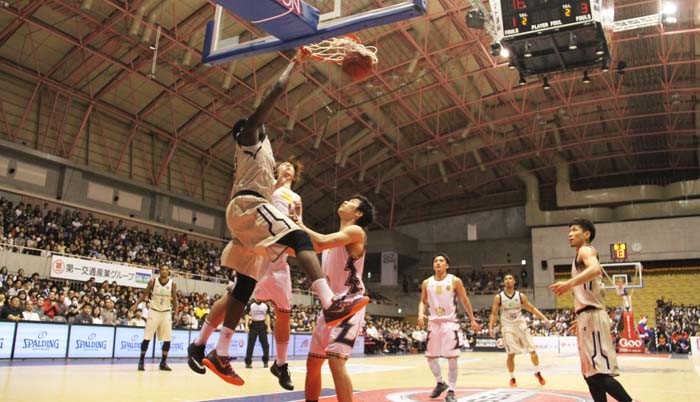 Evan Ravenel together with Draelon Burns wen on a tear Saturday scoring 43 points between them within 15 minutes in the first half of the game.

The Golden Kings took the thunder away from Hiroshima Lightning as they crushed their opponents on both days in the weekend series in Okinawa City. The Kings won 107-66 on Saturday and 112-61 on Sunday, and have now won 15 consecutive games, which ties the record for the squad. 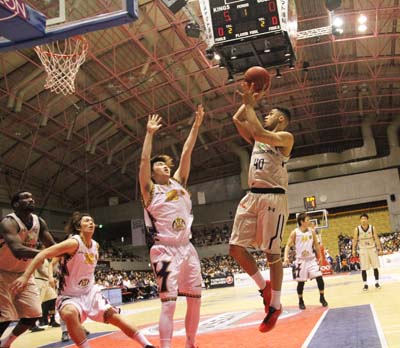 Shinji Arashiro #40 was on court from the first quarter on both days.

The Kings now stand at 38 wins against 10 losses for the season, and they have conformed that they will play the first round of the playoffs on their home court.

On Saturday, the Kings had a 23-point lead after the first half. Shinji Arashiro, a forward usually on the court in the last quarter, played from the first in this game scoring 6 points and 3 assists. Evan Ravenel and Draelon Burns destroyed any ideas that Hiroshima might have entertained. In about 15 minutes, Ravenel scored 23 points and 20 rebounds with Burns sinking 20 resulting in King’s leading 58-35 at the halftime. 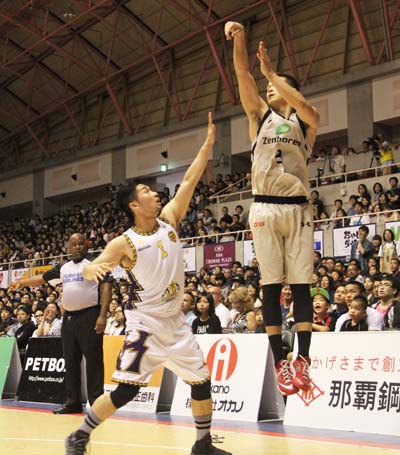 Hitomasa Omiya shows that he can jump. too.

Although the team’s lead was big, the Kings’ head coach Tsutomu Isa was not happy with the defense. For the last part of the game, he made some changes, and the result was that Hiroshima was absolutely smashed.

After the game, Isa said, “I thought the match would be tough, but it was more than I thought, although we won big. Hiroshima is a good, fast team, and we could not play the way we should.”

It was much of the same on Sunday. The Kings went on full throttle from the beginning and had a 30-point lead after the first half.

Arashiro was on the court from the beginning on Sunday, too, and scored 8 points. He also had 9 rebounds and 2 assists.

In contrast to Saturday’s game, the Kings could play the way they really wanted on Sunday. Shota Tsuyama, who has rested for a while because of an injury, came back to the court on Sunday scoring 10 points. Veteran player Naoto Kosuge also hustled on Sunday, piling up 23 points.

After the game, Isa said it was a good, firm game because Kosuge and Arashiro played aggressively and very well. “From next week, we will face a tougher situation, but we know what we have to do now, and victory will be close if we can continue the way we played today,” he concluded.