Ryukyu Kaiensai fireworks and music show tickets are on sale 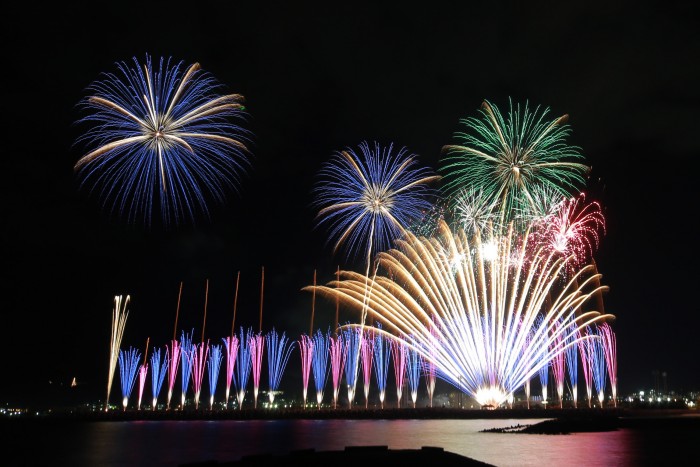 Tickets are on sale for the first fireworks festival of the season, the Ryukyu Kaiensai scheduled for Saturday, Apr. 9.

The annual spectacular that is sponsored by the Japan Airlines, is a collaboration of music and 10,000 fireworks that takes place at the Tropical Beach by the Okinawa Convention Center in Ginowan.

Named the “Ryukyu Hanabi Illusion Festival,” it’s one of the biggest fireworks in Japan. As usual, the event is choreographed by Junko Koshino, the global fashion designer, who puts together the spectacular fireworks that will be accompanied by the music titled “Seimei” that Sochi Winter Olympics gold medalist figure skater Yuzuru Hanyu used in his medal winning performance. Other well-known songs included in the program among others are the main title song from movie Star Wars by John Williams, Waiting for love (Avicii), Can’t Feel My Face (The Weekend), What Do You Mean? (Justin Bieber). Addicted To A Memory (Zedd), Let’s Dance (David Bowie) and Let’s Groove (Earth, Wind & Fire).

The novelty this year is so called “pillar of flame” that has never been seen in a fireworks production like this.

Organizers encourage spectators to bring their own cushions to the venue at Tropical Beach in Ginowan. Gates open at 15:30, and the music and fireworks program begins at 19:30. As there are plenty of food stalls at the event site, no outside food or drinks are allowed.

The event is scheduled to go on rain or shine, but in case of heavy rain or wind, the event will be postponed to Sunday, Apr. 10.

Ticket prices range from ¥2,200 for unreserved general admission advance tickets to ¥91,200 for a special luxury table seating eight people. A complete list of ticket options and reservation is available on the Ryukyu Kaiensai website.  Advance tickets are on sale at Family Mart “E plus”.

Japan Update has five pairs of free tickets to the event to raffle away. Those willing participate should go to JU facebook page.