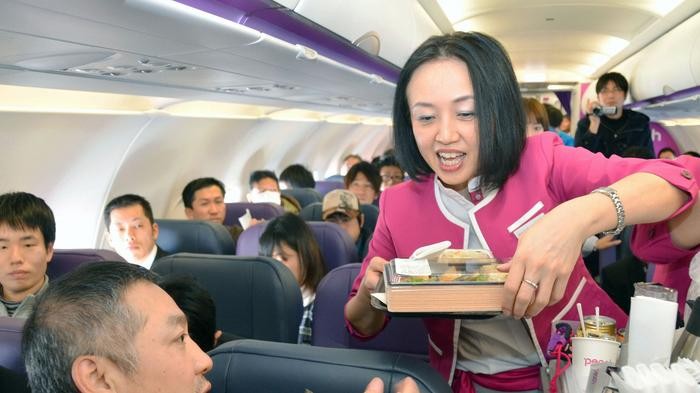 A ticket on LLC buys you a (cramped) seat, everything else costs extra.

I was excited about my trip and was pretty proud of the discount I had found for the short flight across the pond from Okinawa to Taipei, until I arrived at the airport. It is my hope that by sharing my experience, others will be able to make the right decision about taking an LCC on their next trip.

Since I was taking an international flight, it seemed logical to request that my wife drop me off at the Naha International Terminal. After waving goodbye and heading into the terminal, looking for signs and searching for the Peach Airlines counter, it was nowhere to be found. Frustrated and confused, I inquired at the information desk only to discover that the Peach Airline counter was not even in this terminal. Apparently I needed to backtrack with my luggage to the domestic terminal and then take a bus to a separate LCC terminal. This was not the way that I had envisioned kicking off my vacation. 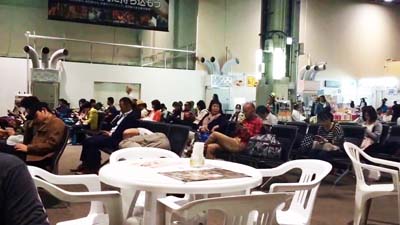 The terminal is separate from the rest of the airport and as spartan in regards of comfort and amenities as the aircraft.

Fortunately, the bus was only a short 5-minute-ride from the domestic terminal but what I found dumbfounding was that they had decided to put the bus terminal only at the domestic terminal and not at the international terminal as well. The short bus ride became quite annoying as we were herded onto a bus that was cramped with more passengers and all of their baggage. The bus dropped us off at the cargo terminal area where there was a barebones warehouse building with the skeleton of what one would expect to find at an airline terminal. This rough start did not provide much confidence in what was to follow but I tried to remind myself that I had saved a good amount of money, or had I?

Waiting in line, I started to calculate the actual cost of the Peach Airlines Low Cost Carrier prices with the cost of a normal airline such as China Airlines for the same route. To my disbelief, it started to look like the China Airlines carrier cost worked out to be cheaper than the discount carriers. The borderline scam that the LCC companies are advertising only accounts for the initial low cost of the plane seat and nothing more.

Initially, the excitement over the cheap seat was overwhelming as I thought about all of the fun and partying I could do with the money that I had saved on the travel portion of the trip. What I hadn’t realized is that there was an additional charge for all check-in luggage. When purchasing the ticket, I had sprung for the baggage fee because I knew that I was traveling with a surfboard that definitely would not pass for a carry on. At the check-in counter they informed me that the baggage fee that I had already paid did not cover my surfboard, as it was considered a different kind of baggage that required a separate fee. It’s difficult to relax and start your trip with a smile when you know that the airline is price gouging you.

After all the fees were paid (credit cards only, no cash accepted), it was finally time to board the plane and it didn’t get any better from there. The seats on the aircraft were stacked three on each side. Luckily, I had decided to pay the extra fee to get an aisle seat near the front, which I would recommend to any average-sized male or tall woman as the seats are ‘snug as a bug.’ The seat actually felt as if it was curved inwards, the exact opposite than the way a chair supports your posture, which I can only assume is designed for space conservation rather than comfort in mind.

Prior to the flight I had mentally prepared myself for the uncomfortable seats but it didn’t take long before my hour and half flight started to feel more like a life sentence of confinement and contortion.

Once I had time to sit down and properly research the cost of LCC flights versus normal carriers’ flight costs, I was mortified to find that my initial hunch had been correct all along. The cost of a flight with a normal carrier would actually have been cheaper as a whole. They do not charge for baggage and there was no extra charge for surfboards.

I think that I am also safe to assume that the seats are designed with ergonomics and some customer comfort in mind. Before booking your next domestic or international flight tempted to take the cheaper looking LLC option, seriously consider the total cost. Low cost carriers advertise cheap seats but do not openly inform the consumer that a seat for a contortionist is what you really get with this deal. Anything above and beyond the seat is going to cost you extra and will tap into your ‘funtime funds’ that you have carefully squirreled away for your much anticipated short but sweet vacation.