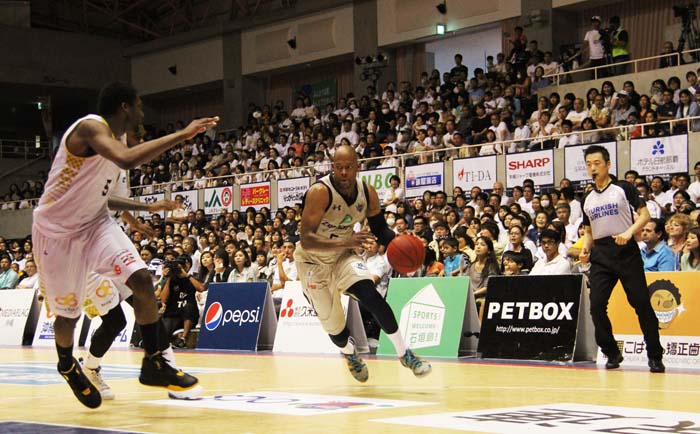 The Ryukyu Golden Kings swiped Kanazawa Samuraiz in the first round of TKbj-League Playoffs last weekend on the Kings’ home court, Okinawa City Gym. The win means the Kings will encounter Osaka Evessa this weekend to play the conference semifinal matches at the same venue, Saturday, starting at 15:00. On Sunday, the match begins at 13:00. The team that wins the semifinal will go to Ariake Colosseum in Tokyo to play in the finals next weekend. 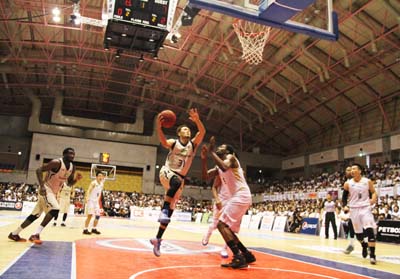 Shuhei Kitagawa scored 13 points on Saturday followed by the team-high 18 points on Sunday.

Both games on the weekend between the Kings and Kanazawa were very tough, and the Kings had to work very hard to win. The game on Saturday was very even but at the end the Kings prevailed thanks to their consistent scoring.

It was a very tough game, and the Kings’ Head Coach Tsutomu Isa acknowledged that his team had barely managed to snatch the win. “This was a very, very important game for us to win, and now that we won we can look forward to an extra dose of energy for tomorrow’s game. I expect the game tomorrow to be tough again,” Isa said after the game. 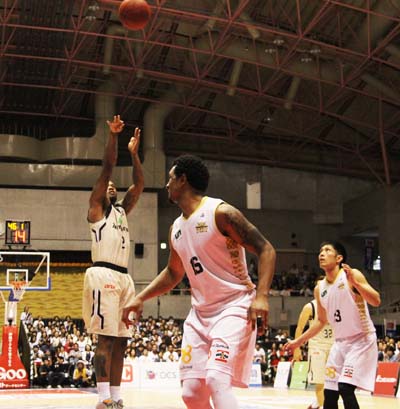 Draelon Burns (#2) sank 12 points on Saturday in less than 15 minutes on the court, while sinking 17 points more on Sunday.

On Sunday, it was again a very tough match, indeed, but the Kings kept the lead from the beginning, and won safely 88-73. Until the 2nd quarter, the game was quite even in the same way as the day before. At one point, the Kings led by 17 points in the 2nd quarter, but Kanazawa fought back, and narrowed the gap to just 2 points before the first half finished with 49-43 for the Kings.

In the 3rd quarter, both squads did not allow any advantage to each other, but in the 4th quarter, the Kings pulled away from Kanazawa with brute force, mainly by pinning Kanazawa to only nine points in the last 10 minutes of the game. The Kings finally sealed the victory with a 15-point lead.

After the game, Isa said that he had noticed Kanazawa was getting tired. “I decided to mount a strong attack in the 4th quarter, as I thought Kanazawa looked fatigued at the beginning of the last half. We just kept the gap to our advantage through the 3rd quarter, and then hardened our offense in the 4th. And that did it!” Isa explained.

He also had praise for the opponents, and a warning for his own squad. “Kanazawa is a very tough squad with their offense and defense both good. Also, we created some situations in which we could have missed easily. We can’t play this type of game in the next stage.”

The Kings will face Osaka Evessa in the semifinal, also on the home court at Okinawa City Gym this weekend. Osaka, which finished the season on the 6th place in the Western Conference, beat the 3rd place Shimane Susanoo Magic in the first round last weekend. One can honestly say, Osaka really wants to win.