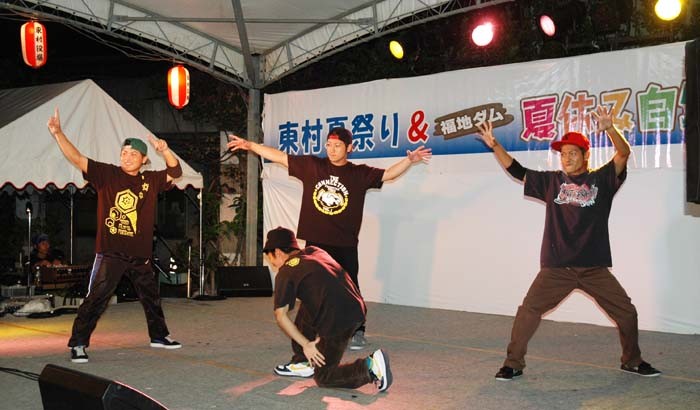 Higashi Village on the northeastern coast of Okinawa main island is an active community of some 2,000 residents. It’s known for its Azalea Festival in the spring, its large Eco-park camping ground, and a producer of pineapples. Higashi Village is also the location of Fukuchi Dam, which is the tallest of Okinawa’s dams.

The U.S. Army Corps of Engineers began the construction of the dam in 1969, and the Government of Japan completed it shortly after Okinawa’s reversion in 1972. In 1991 it was raised to its current height of 92 meters.

Fukuchi Dam is also the venue of an annual festival that takes place on Sunday, July 17, from 10:00 to 16:00, where visitors can try paddling in canoes on the dam or ride on a sightseeing boat. Canoeing costs ¥300 for people of high school age and older, and the price for the sightseeing boat ride is the same.

20 people can participate in canoeing each time on a guided tour on the dam that takes about 40 minutes. Four tours are conducted before noon, the first stating at 10:30, and three more in the afternoon. Sign up for the morning canoe tours is at 10:00 and 12:00 for afternoon trips. Both take place at the Azalea Park parking lot. Children taking part in the paddling trip with their parents must be over four years old.

There are three sightseeing boat trips before noon and three more in the afternoon. 42 people can take part each time and the trips take about 30 minutes. There is no age restriction on the sightseeing trip.

There are also some nature workshops, crawfish catching and a water slide in the man-made river that flows from the dam. The dam facilities are open for tours to show how it was constructed and how it is operated.