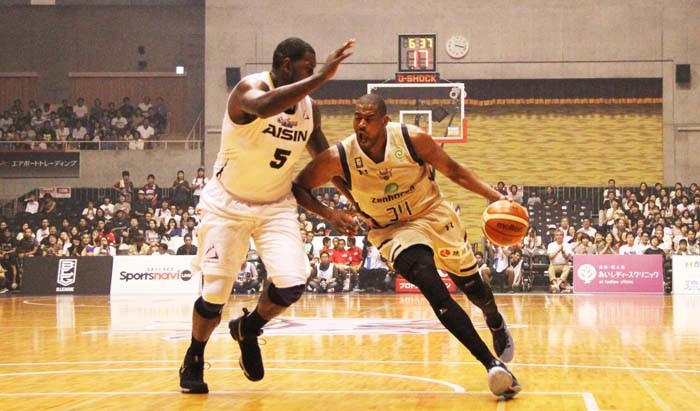 Lamont Hamilton (#34) has already proven to be a powerful scorer. (file photo game against Mikawa Seahorse)

On Saturday, the Kings again seemed to have problems to start their engine, and the game was very tough uphill battle until the end. After the first 5 minutes from the start the Kings had not been able to score a singe point, and trailed 0-12.

The Kings finally got their game on in the 3rd quarter with 3-pointers from Kishimoto and Hamilton, and Kitagawa also did his part with a few clever shots. After the number on the board turned, Yamauchi and Tsuyama worked very well, and the team kept widening gap until the game end, when the numbers were 81 to 74 for the Kings.

Tsutomu Isa, the Kings’ head coach, said it’s very to begin the game the way the Kings did, especially playing on the road. “Kyoto played with obsession for a win. If we continue playing like today in the future, we can not win at all. We have to think over this game, and try to do better tomorrow,” Isa said after the game.

On Sunday, the Kings again gave lead to Kyoto at the very beginning of the game, but turned the score immediately with 3-point shots by Kinjo and Hamilton and finished the 1st quarter with 23-17 lead.

After the second quarter, Omiya and Kitagawa worked well and didn’t allow the wave of the game to flow to Kyoto’s way any more. Lamont Hamilton shined on the court contributing 24-points and nine assists to the final score.

The game ended with 83-81 and Kings now have 5 wins and 3 losses that places them on the 3rd place in the Western Conference.

After the game, Tsutomu Isa said, “The good thing about today’s game was just the win, the other parts were not so well. I confirmed that some of our players did well as we planned, but some did not. We can’t pull our level up without all players accomplishing what has been planned.”