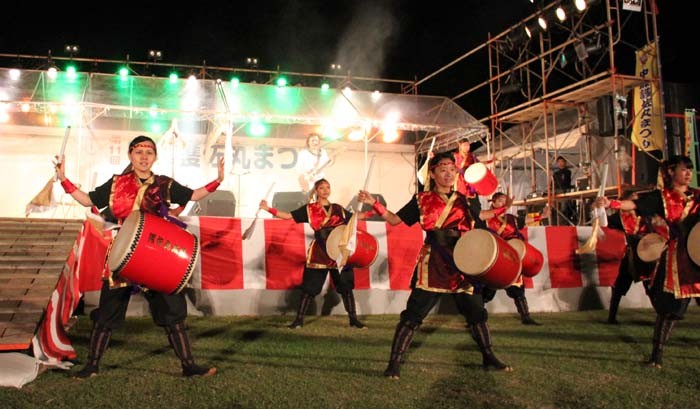 Gosamaru Festival is famous for its drum, eisa and shishimai performances.

One of Okinawa’s most famous tales is the legend of Lord Gosamaru, the 15th century lord of Nakijin, Zakimi and Nakagusuku Castles who, after supporting the first King of the united Ryukyu Kingdom, Sho Hashi, was betrayed by a rival lord of Katsuren, and rather than fighting the King’s army, out of loyalty to the King, committed suicide. Knowing his rival from Katsuren, Lord Amawari, would present his head to the king in Shuri, Gosamaru had placed a note in his mouth telling about the duplicity of Amawari. The discovery of the note led to the execution of Awamari.

How much of the legend is true, remains in dispute, but the existence of both of the characters does not. A kumiodori play, opera and numerous other works of art has been made based on the tale that remains a popular entertainment to this day.

The Nakagusuku Gosamaru Festival takes place at Nakagusuku Castle Ruins on Oct. 22 and 23. The festival is not an annual event and it has been three years since last time. Admission to the event including the UNESCO World Heritage castle site is free and the events run from 14:00 to 21:00 on both of days.

On Saturday, the highlight of the program is a shouting contest starting at 16:00. Contestants can shout anything they choose within limits of good manners, but exclaiming your love to someone special or a simple thank you are recommended. The person with the loudest shout will be the winner. People of any age can take part, and the sign up for the contest is at 15:30.

Fireworks at 20:50 end the festival on both days. No smoking is allowed on the festival grounds, and pets are also not welcome.