Shuri Castle and Ryukyu royalty on show this weekend 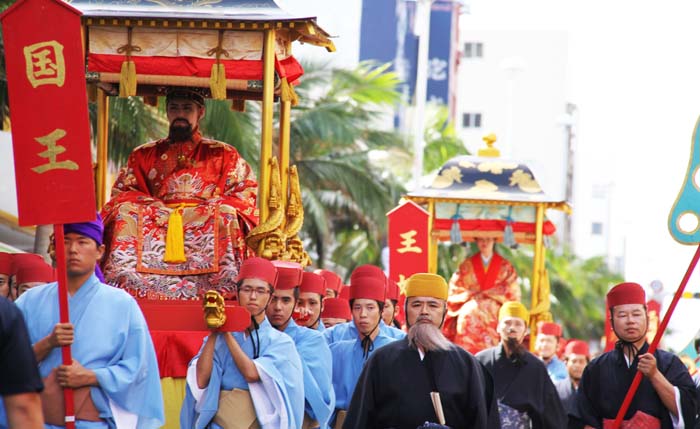 The King and Queen are carried in their palanquins the entire length of Naha’s Kokusai Street.

Classical Ryukyu dance, musical drama, ceremonies and a parade on Kokusai Street filled with pageantry are the essence of the traditional Shuri Castle Festival, one of the three annual main festivals commemorating the life and splendor of the Ryukyu Kingdom.

This year, the festival coincides with the 6th Uchinanchu Festival that is organized only every five years, and which brings together people of Okinawan roots from all over the world. About 350,000 people are expected to participate and over 7,000 of them from overseas. 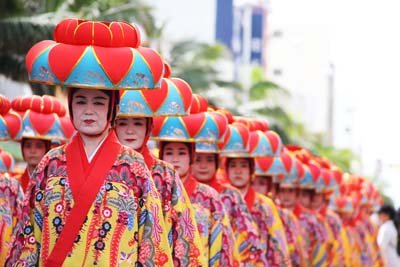 The parade includes dancers and other performers.

The 2016 Shuri Castle Festival kicks off on Friday, Oct. 28, beginning a three-day event that culminates in a historical costume parade along Kokusai Street in Naha. Other events include a variety of traditional dance, ceremonial traditions and parades that are staged at various locations within Shuri Castle.

A Sapposhi (Chinese emissary) Parade from Shurei-mon (gate) to the Una Court in the middle of the castle proceeds from 11:40, followed by a tributary and coronation ceremony of the King and Queen on the court. This event is the only one with an admission fee that is ¥820 for adults, ¥620 for high school students and ¥310 for junior high and elementary school children. Under 6-year-old kids get in free.

The parade along Kokusai Street with more than 700 historically costumed participants takes place on Sunday, starting at 12:30 and running until 14:30 p.m.