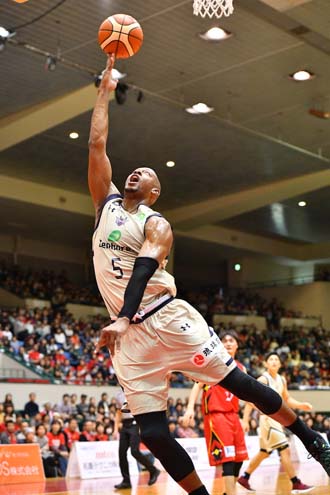 Anthony McHenry scored 13 points in the hard-fought Sunday game that the Kings lost in the end. Photos by B.League

On Saturday, the Kings won 74-66. The game was also the debut match of the Kings’ new face Reyshawn Terry, and he right away showed his ability by scoring 12 points for his new team. The top scorer for the Kings was Lamont Hamilton with 13 points.

In the 1st quarter, Hamilton and Kazuya Hatano played well, and the Kings ended the quarter with a 3-point lead. In the 2nd quarter, Terry kept his pace shooting well from in and out, and the score at the end of first half was 43-25.

In the final quarter, Dolphins caught up and were just 3 points behind, but towards the end of the game, Anthony McHenry and Ryuichi Kishimoto piled points and secured the win for the Kings.

Tsutomu Isa was happy with the win, and said after the game, “We were losing the momentum, and our win today makes me very happy. This match was kind of similar to last time, but the team remembered our last regrets well and were able to stay focused.” 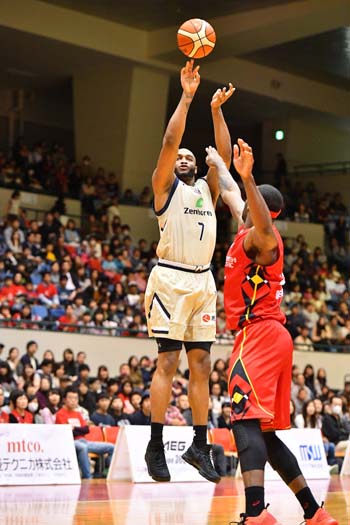 Rayshawn Terry (#7) made his debut with the Kings on Saturday. The Kings won the game.

New face Rayshawn Terry commented, “This was my first game with the Kings, and I’m happy to win with my new teammates.”

On Sunday, the Kings tried to put speed in their game. Naoki Tashiro and Hamilton did good work from the start, while McHenry and Shuhei Kitagawa also worked well in the 2nd quarter. The score was 39 – 36 in the end of the first half.

The game keep seesawing until the final minute, when the score was 70-71. However, the Kings could not make a single shot during the last minute, and also gave a foul to the Dolphins, finally losing the match 70-78.

After the game, Kings’ Head Coach Isa said, “The game today was a test of endurance all the way until end, but we finally gave a win to them and lost.”

The Ryukyu Golden Kings will play a home game this Wednesday, a Japanese Labor Day national holiday, at Okinawa city gym. The tip off is at 19:00.