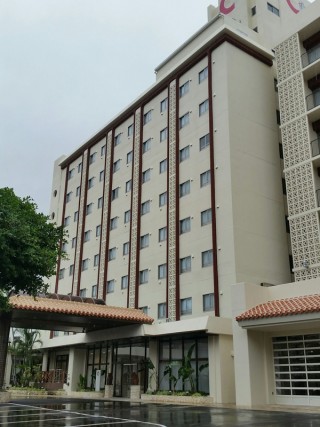 The Community & Spa Naha Central Hotel in Makishi, Naha City that has been under renovation since June celebrates the grand opening of the new 96-room extension building of the hotel named “East Tower.” The addition of the East Tower to the hotel increases the accommodation capacity at the hotel, to 190 rooms, including its “Main Tower,”

There are four different types of rooms in the East Tower, ranging from 12 to 30 square meters in size. The Main Tower is designed for women and families, whereas the East Tower is targeting groups on school trips. It also has rooms for meetings and luggage storage.

One of the rooms named “Universal Room” is specifically designed for elderly and physically challenged customers with sliding doors and an emergency button in the bathroom that sounds an alarm bell in the bedroom next door. They newly opened a café “Grand Blue” on the first floor of the hotel serves siphon (vacuum brewed) coffee and cold-brewed iced coffee.

The basic room charges at the hotel start from ¥8,640/person for a twin occupancy.