What the rope lacks in size is more than made up with the enthusiasm of the crowd.

A Santa Claus accredited and certified by the “International Association of Authorized Santa Clauses” will be the guest of honor at the Okinawa City International Carnival 2016 on Nov. 26 and 27. 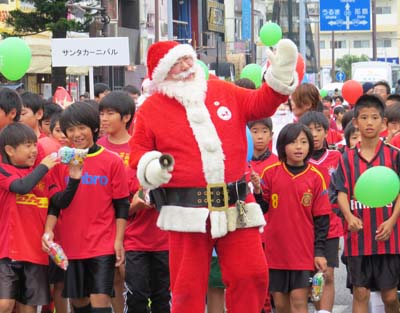 Santa will be the guest of honor.

The festival takes place Saturday and Sunday in areas around Gate 2 Street, Koza Music Town and Chuo Park Avenue. Admission is free, and the arrival of Santa Claus Carnival will add excitement especially for the young participants of the festival, which gets under way at 13:00 both days and runs until 21:00

The International Great Tug-of-War, a carnival parade and the Samba Parade are the high points on Saturday. Although the rope is smaller than in the world famous Naha tug-of-war, the fun is at least as big. The rope is abut 80 meters long and weighs 10 tons, which gives plenty to pull for the 2,000 plus people who take part in the contest. The pulling and puffing is scheduled to begin at 18:30 and anyone can join in. 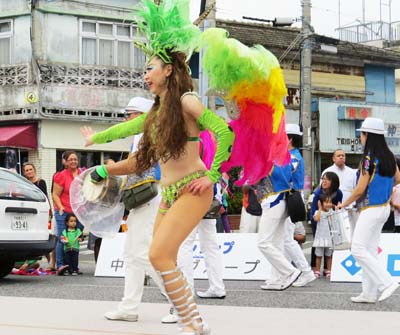 Samba parade takes place on Saturday after the International Parade.

Prior to the tug of war, the carnival parade, featuring participants from various countries, including the United States. Philippines, Peru and Mexico and presenting their cultures through performances, will proceed starting 14:30 at Mutsumigaoka Park continuing through Route 330 and ending on Gate 2 Street. An International Samba Parade will be part of the procession.

After the parade, It’s the time when Santa Claus will arrive and warm up the carnival-goers. There will also be contests for the best costume, and organizers say it doesn’t have to be a Christmas costume. People taking part in the parade on Saturday are encouraged to dress up.

On Sunday, motorcycle riders from all over the island will assemble on Gate 2 Street, which will be closed to traffic and packed with some 150 rumbling bikes for a parade that starts at 13:00.

Okinawa City prides itself as the Eisa city.

A rock concert and dance contests are also on the Sunday program.

And as in every festival on Okinawa, plenty of food vendors and game stands will offer specialties unique to Okinawa, America and other countries. After all, Okinawa City is home to people from over 30 different countries of the world, so a wide variety of foods is a given.

Organizers emphasize that streets and roads will be subject to traffic restrictions during the weekend event. They also encourage people to park a distance away, because parking in the immediate

Harleys’ turn to rumble is on Sunday.