Ryuichi Kishimoto prepares for an attack.

Toyama Grouses, currently the lowest ranking team in the Central Conference, showed that the still can muster what it takes as they made a clean sweep in a pair of weekend road games against the Ryukyu Golden Kings in Toyama City.

On Saturday, the Kings got into a bad start and gave the lead to Toyama until the end of the 3rd quarter, but in the final quarter, the Kings finally came from behind with Shuhei Kitagawa’s a 3-pointer and a score by Lamont Hamilton.

The numbers on the boards were 87-83 until only 8 seconds of the game was left. But, within the last eight seconds, the Kings fouled, which resulted in three free throws with Toyama scoring all. After that, the game started again with the Kings’ offense, but Toyama managed a turnover with six seconds left, and shored with just two seconds left in the game. And that nailed it for Toyama and the Kings lost. 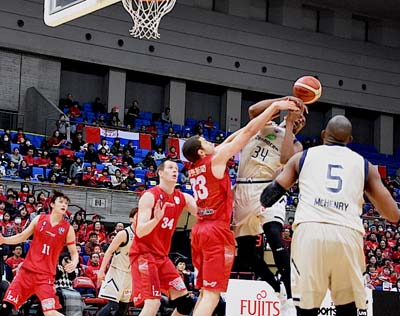 Tsutomu Isa said after the game, “We allowed the wave of the game to go to Toyama’s favor all the time, and could not get our game flowing. The result was a lot of easy misses.

On Sunday, the game went from bad to worse, as the Kings lost 70-92. From the first quarter, the rhythm of the Kings was bad with plenty of easy misses. The score was 32-50 at the end of the first half.

Although the second half was not as bad as first, the Kings could not catch up with Toyama even once during the whole game.

Isa blamed the loss for mental factors. “The spirits of both squads was different from before the game, and we already lost before the start of the match. We should have taken the game as a challenge because we lost last night, but we could not. We have to become mentally stronger,” Isa concludef.

Ryukyu Press offers pair of free tickets to the Golden Kings’ home game on Jan. 28th or 29th at Okinawa City Gym.  Apply by email info@ryukyupress.com or with a Facebook message, find us at Okinawanderer, on Facebook.