Rayshawn Terry prepares to sink one in the King’s New Year road game.

The Ryukyu Golden Kings earned a much welcomed weekend swipe in their last pair of games of 2016 in a road game at Hokkai Kitaeru Sports Center in Sapporo, Hokkaido, on Dec. 30 and 31.

The team faced Levanga Hokkaido, the northernmost team in the B. League, winning both games. 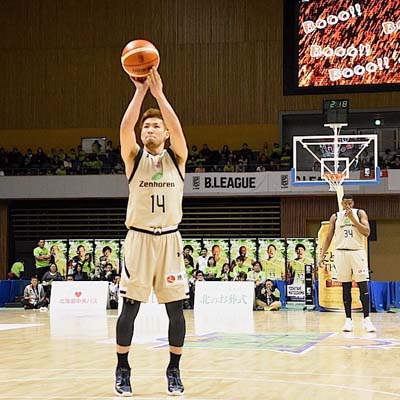 Ryuichi Kishimoto concentrates on his free throw as Lamont Hamilton looks on.

On the 30th, the start was not good, as has been the case with many of the team’s matches lately. However, Ryuichi Kishimoto’s efforts led the team to take the lead from the end of the 1st quarter. In the 2nd quarter, young players Naoki Tashiro and Shota Tsuyama played well and secured the leading score at the end the first half with 48-41.

In the final quarter, the Kings geared up very well, and inside shots by Lamont Hamilton and Ryuichi Kishimoto’s 3-point shot nailed the game with 98-79 on the board in the end.

On Sunday, the first half went well with Rayshawn Terry in the lead, but in the second half, the Kings lost their compass, and the game turned over at one point in the 3rd quarter.

The final quarter was very tough for both squads with the score numbers on the board staying even, but at the end, Lamont Hamilton scored the final point with a drive shot with only 0.1 seconds left on the clock, securing the winning score 76-74 for the Kings.

Head Coach Tsutomu Isa admitted the game was very close until end but the players kept their calm and won. “This was a very good experience for us. Consecutive wins have eluded us for a long time, and this could be a good omen for next year,” Isa said.

Next, the Ryukyu Golden Kings will encounter Kyoto Hannaryz at Okinawa City Gym on Jan. 18 (Wednesday).