“MESH Support”, a specified nonprofit cooperative that manages a private medical helicopter service, celebrated its 10th anniversary on June 15th while in the middle of financial distress.

This fiscal year, 12 municipalities in the northern Okinawa postponed their annual subsidies to the service, which grounded the MESH helicopter operation. According to persons involved in the operation, it’s unclear when the operation of the helicopter can resume. At a press conference on June 15, the chairman of the cooperative expressed gratitude to those who had supported the cooperative, and said, “We need financial support from the government to ensure a stable operation of our mission.”

This is the 4th time the operation has stopped since the Northern Okinawa Medical Center started the MESH in 2007. MESH had been entirely managed with funds from donations until the end of 2013, after which subsidies from the government and 12 municipalities stepped in.

Opinions about the subsidies have differed among the 12 municipalities though, and they decided to postpone them this year. Specifically, the municipalities differ on the necessity for the medical helicopter service. 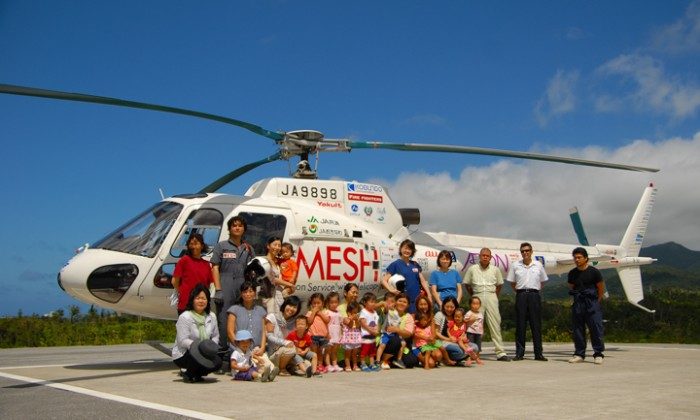 The annual operational expense of MESH is about ¥140 million yen. 20 to 30% is covered with donations from private sources.

Hiroki Tsukamoto, the executive director of the cooperative, says, “It’s important to respond to an emergency call within 15 minutes, and that’s possible only when using the helicopter. We would appreciate continuous support from both the private and public sectors.”