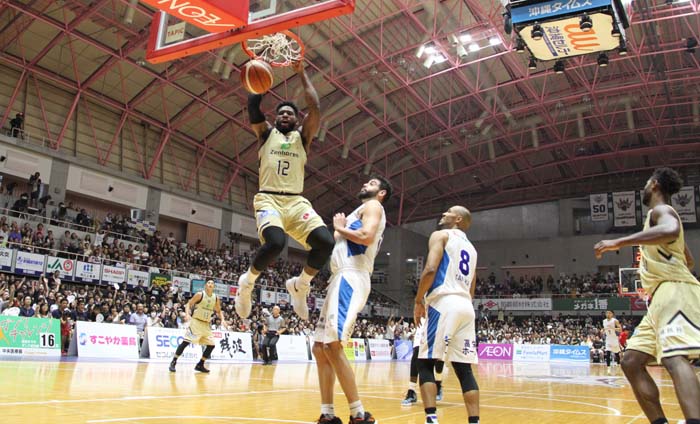 Hassan Martin dunks one on Sunday.

The match between the Ryukyu Golden Kings and Shiga Lakestars started with a slam-dunk by Ira Brown. Ryuichi Kishimoto became a playmaker in the game with 3 assists in the first quarter.

5 minutes after the game started, the Kings increased their defense, and kept the Lake Stars scoreless for the last 5 minutes of the first quarter. 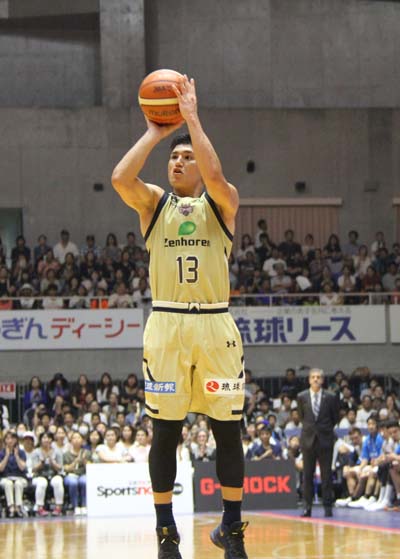 In the second quarter, the Kings allowed the Lakestars only two free throws, and turned the tide by defense.

Takumi Ishizaki, who entered the game midway, scored several points thanks to his good footwork. Hilton Armstrong excited the team with his forceful slam-dunk.

In the third quarter, the Kings increased the pressure and further enhanced their defense. Kishimoto, Syota Tsuyama, and Yutaro Suda each shot 3-pointers, as did Shigeyuki Kinjo just before the end of the 3rd quarter.

In the fourth quarter, the Lakestars gained points first, but 3-point shots by Kinjo and Tsuyama, and good work by Naoki Tashiro led the Kings to win the game 84 to 53.

It was almost a different story on Sunday.

In the first quarter, the Kings got to the lead with Suda’s 3-point shot, but the tide changed in the second quarter, as Lakestars’ Namisato got a handle of the game and turned it around.

The Kings changed some members that resulted in giving the Lakestars a burst of energy and momentum. The Lakestars scored 11 points more during the last 8 minutes of the quarter.

However, the Kings were able to change the tide when Kishimoto came in as a substitute and scores a 3-pointer, followed by Shigeyuki Kinjjo. Then Tsuyama who played aggressively in defense also scored a 3-point shot that led to a time-out by Lakestars.

While all the audience was full of excitement, Kishimoto scored twice. Then Kinjo made another 3-point shot to lead the team to win the game 72-63.