The totally renewed Golden Kings has kicked off the 2nd B.LEAGUE season

The completely renewed Ryukyu Golden Kings has started their 2nd B.LEAGUE season since the end of the last month.

The Kings which is the most highest number of victories and the final championship of the bj league, was finished as the 8th place at the first season of the brand new B.LEAGUE which combined bj league and NBL last year and started as the literally top league in Japan.

Then Kings has replace member to member very much and also changed Head Coach either from last season for play enough against such as strong teams from NBL. Actually 8 of 13 members left the team from last season, and contracted 7 new members from other squad.

#6 SF Shigeyuki Kinjo the only one player who has been playing at Kings since Kings founded year. #13 SG Shota Tsuyama the youngest member who joined the team since he was High School student. #14 PG/SG Ryuichi Kishimoto who joined the Kings since 2011 and led the Kings as the captain from 2015 and still captain in this season too. #16 SF Ryunosuke Watanabe just joined to Kings although when he was University student. #24 SF Naoki Tashiro also joined to Kings last season just after graduated the university.

New Head coach Norio Sassa has not done experience as a head coach before, but has much experience support Japan National team as an assistant coach against such as foreign teams., This is the brand new Golden Kings and you know that’s why it could say its totally different team from the past. Grab the championship of the B.LEAGUE!! Go! Go! Kings! 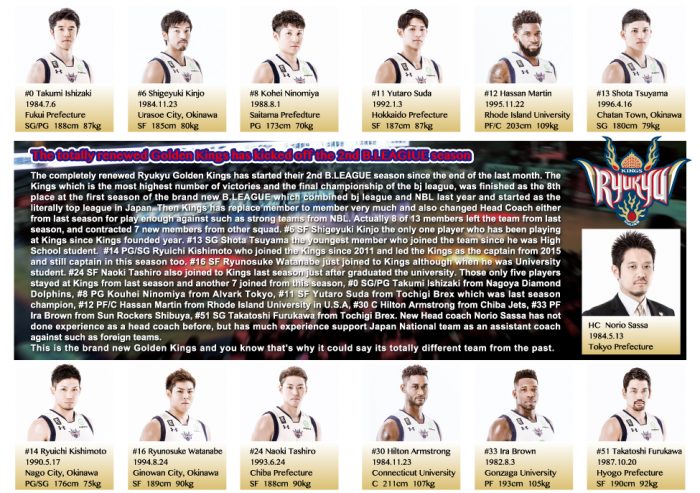