University of Ryukyu announced Monday that it’s team of researchers have discovered the world’s largest microatoll of porites about 150 meters off the southern coast of Sesoko Island. 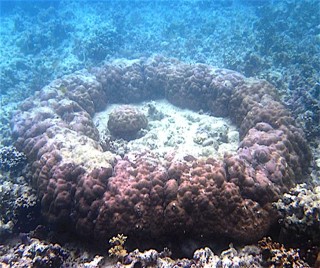 A microatoll off the coast of Australia.

A microatoll is defined as a coral block shaped like a doughnut because the part near the sea level is dead. The microatoll off Sesoko is 11.1 meters in diameter, with the rim 33.7 meters in circumference. It exceeds the size of the largest so far in the Marianas that is 9 meters in diameter.

The research that led to the discovery is a collaborative project of Professor Hideyuki Yamashiro of the Sesoko Tropical Biosphere Research Center, the University of the Ryukyus, and Professor Ichiro Takeuchi of Ehime University Graduate School of Agriculture. They fist found it in March, and confirmed it was a microatoll in April.

There are a few microatolls in Okinawa, for example there’s one off Ishigaki Island with a 6.5-meter diameter.

According to Professor Yamashiro, the waves off the southern coast of Sesoko are mostly moderate with little effect from the land, which makes the location ideal for corals to grow. The newly found microatoll has a deep hole at its bottom and big erosion area in the center. It’s expected to grow larger until it collapses.

Professor Yamashiro says that there are many precious corals around Sesoko, and “I would like people just watch them from a distance when they visit while engaging in marine activities.”