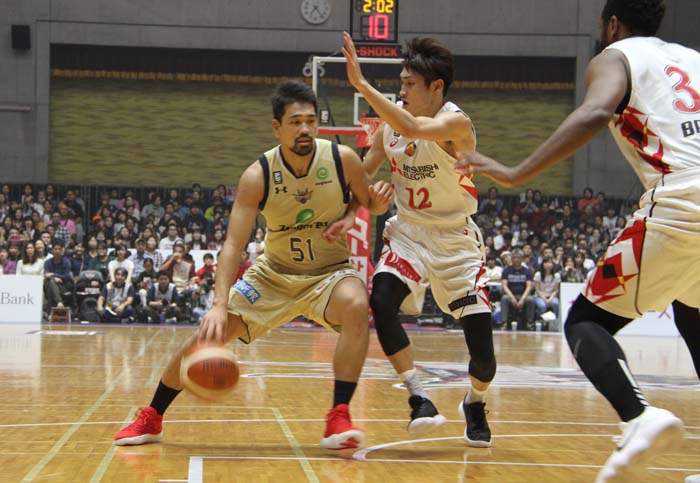 The Kings’ Takatoshi Furukawa (51) making a move against Nagoya in Saturday’s game.

The Ryukyu Golden Kings made a clean sweep over the Nagoya Diamond Dolphins in the weekend pair of home games on the weekend. That gave the Kings their fourth and fifth consecutive wins that keep the team in the first place of the Western Conference. 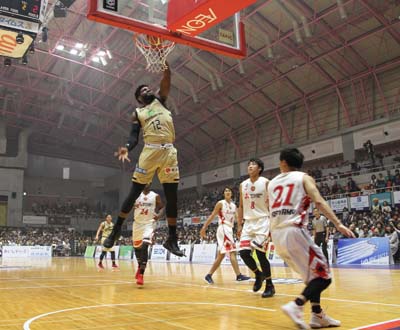 On Saturday, Shouta Tsuyama, the youngest player in the league, made four 3-point shots in the the 2nd quarter, while playing great defense.

In the final quarter, Nagoya once caught up with just one point behind the home team, but Takatoshi Furukawa scored just at the big moment, and the match finally ended with a nail-biting 67-64.

On Sunday, the 1st quarter was a see-saw game, but the Kings scored big in the 2nd quarter making 24 points against 10 for Nagoya.

The Kings kept their lead all through the last half, and the number on the scoreboard stood at 72-59 in the end.

The next home game for Kings is against Nishinomiya Storks on Dec 16 and 17. They will face Kyoto Hannaryz on Dec. 20, which will be their final game of 2017.