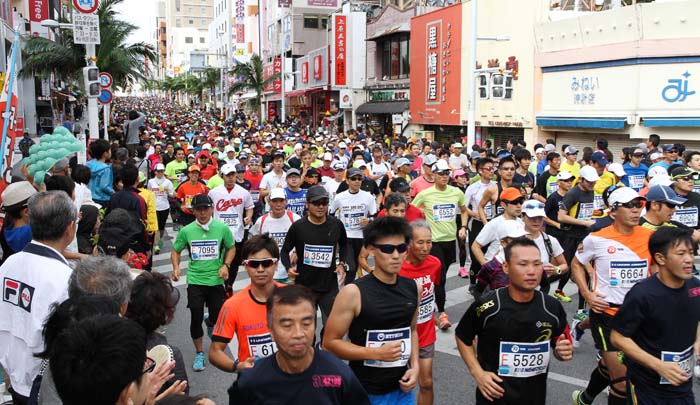 Runners fill Kokusai Street in Naha shortly after the morning start of the marathon.

30,000 runners picked from a much larger number of applicants will line up behind the starting line at Meiji Bridge on Highway 58 in Naha to start the 35th Naha Marathon. The weather forecast for the day is sunny skies with a probability of rain at 30% and temperatures up to 25 make conditions perhaps a bit challenging. 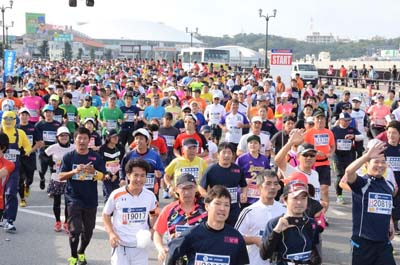 Before the start, all 30,000 participants gather in the Onoyama Park before crossing the stating line on Meiji Bridge.

The Naha Marathon began in 1985 in commemoration of the 25-year sister-city relationship with Honolulu, Hawaii. The full marathon 42.195-kilometer course through the five cities and towns in the southern region of the island, including Haebaru and Yaese Town, then south to Itoman, and back through Tomigusuku and to the finishing line in Onoyama Park in Naha City.

The route has changed a little for this year towards the end of the course, mainly because of the changed traffic flows after the completion of the Tomigusuku and Itoman elevated bypass roads. The route now goes from Itoman Rotary past Tomigusuku City Office on Hwy 331, to Nakachi Crossing and left onto Oroku Bypass, then passes Tomigusuku Police Station on the north side, along Oroku Bypass past AEON Naha to Yamashita Crossing and then continues to the finish line in Onoyama Park. 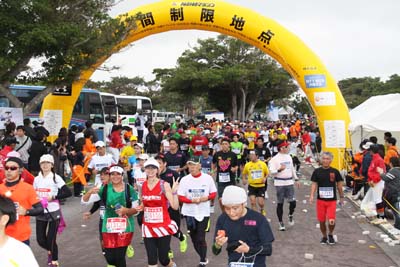 The finishing line is at Onoyama Stadium.