Northern Okinawa has a unique distinction of having the earliest blooming cherry blossoms in all of Japan. Though they are different from those found in mainland – you can say they are a distant cousin of sorts, they are nevertheless, just as beautiful. When these pink flowers bloom will depend upon the weather, or rather when the peak cold season begins in Okinawa. In Japanese, cherry blossoms are referred to as ‘sakura’, and usually towards the end of January in Okinawa is when you start to see the ‘sakura’ come alive and with that, comes the Cherry Blossom festivities. 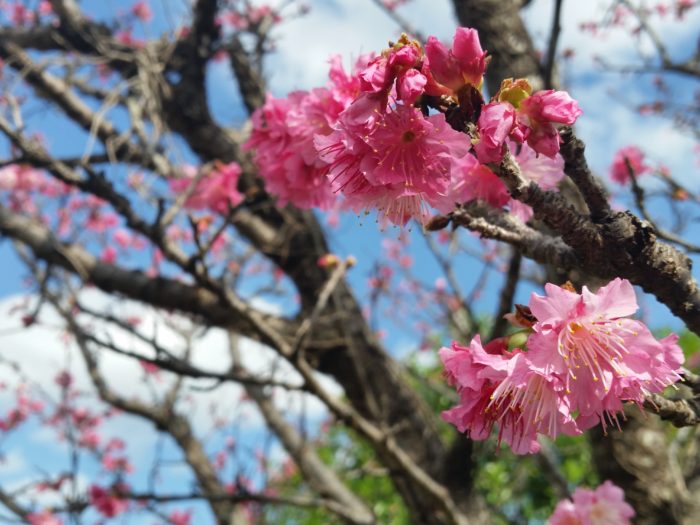 The first event is taking place at Motobu’s Yaedake Sakura Forest Park which officially started on January 18th and run through February 2nd. This will be followed by The Cherry Blossom Festival at the Nakijin Castle from February 1st through February 9th. And Finally, we have Nago City’s most famous festival, the Sakura Matsuri, which will take place over the weekend of January 25th and 26th.

The Motobu Yaedake Sakura Festival features family-oriented entertainment on all three of its weekends. There’s also a play area for children and food and drink vendors to quench your thirst and appetite. The location of these cherry blossoms is what sets this festival apart from others. Along the long road up towards Mount Yae, which rises to an altitude of 453 meters above sea level, are thousands of cherry trees giving this place a unique site for these spectacular flowers. It is said that the road is lined with about 7,000 Kanhi Cherry t­rees that were originally planted by the U.S. military a long time ago. Yaedake is usually the place where the flowers bloom the earliest. 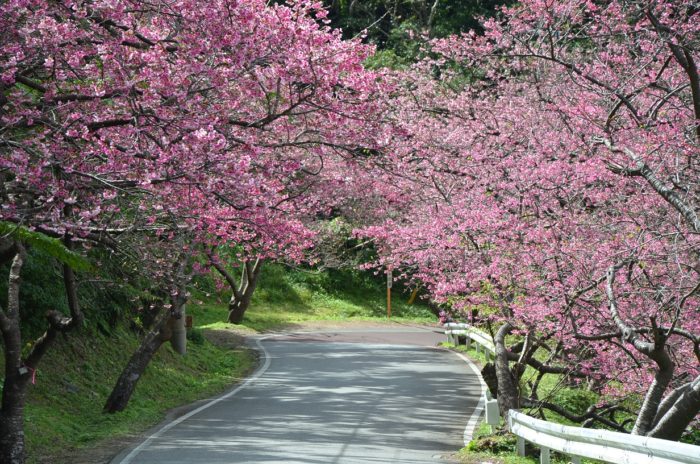 The Nakijin Gusuku Sakura Festival kicks off on February 1st at the ruins of Nakijin Castle. The castle is listed as a UNESCO World Heritage site and is the second largest castle on the island after Shuri Castle.

The cherry blossom trees around the castle site are illuminated in the evenings from 18:00 to 21:00. However, the castle site opens at from 10:00 to 21:00 every day with last entries to the site at 20:30. Admission is ¥400 for adults, and ¥300 for elementary and junior high school age students. Younger children can enter for free. About 300 cherry trees stand in a single row from the castle gate to the main enclosure. 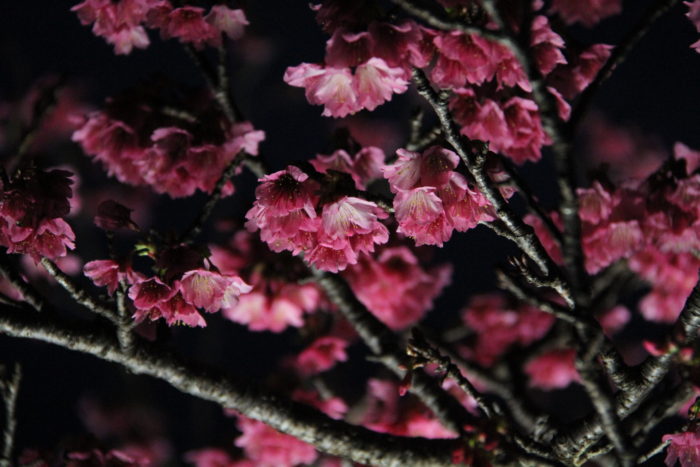 The biggest and best-known cherry blossom festival takes place on January 25th and 26th at the Nago City Central Park. This is the famous Nago Sakura Matsuri which runs throughout the day and night. Besides food, drinks, and game booths, there will be brass bands and a parade on the city’s main street which is closed for traffic during the festival. The main entertainment stage will be along the road. 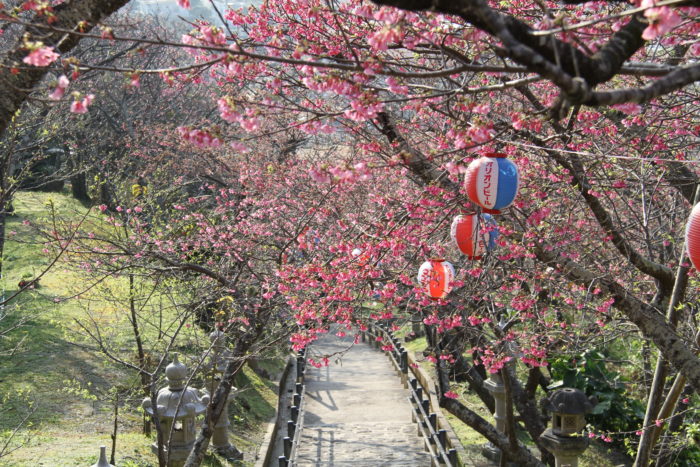 Good walking shoes or sneakers are recommended for the trek up the well-marked paved roads and walkways to the top of the mountain, where you can see a spectacular view of not only the cherry blossoms, but of Nago City and the East China Sea. The event draws tens of thousands of locals and tourists alike every year.

Parking close to the festival area is very limited. The best and free place to park is at the Nago City Fishing Port which will have a gardening festival going on at the same time. From there, a free shuttle bus takes visitors to the festival area. Parking at the port also allows for an easy escape when departing.

To visit Mount Yaedake, continue on Hwy 58 north through Nago City and then turn left onto Route 84 to Motobu. Just before Motobu, watch for signs that direct you to Mount Yaedake.

To visit Nakijin Castle, go through the Nago City following Hwy 58, and turn left on Route 84, heading towards Motobu. Shortly before Ocean Expo Park, turn right on Highway 449 and you’re two kilometers away. The route is clearly marked. To get to the Nago Fishing Port for the Nago Sakura Matsuri, go north on Highway 58 and go pass A&W on the left-hand side. Soon you will see the Nago Fishing port on the left. Signs will be posted.