The people of Okinawa are welcoming the Obon festival today through Saturday, a time of paying homage to their ancestors.

The Obon festival is held here according to the lunar calendar, and is sometimes called the celebration of the deceased ancestors. The three-day Obon takes place starting Aug. 15th in mainland Japan, but Okinawa has preserved its original lunar calendar date to this day. So, today through Saturday are the days this year.

This article explains the Obon customs in Okinawa, while Obon in Japan is very different from Okinawa. 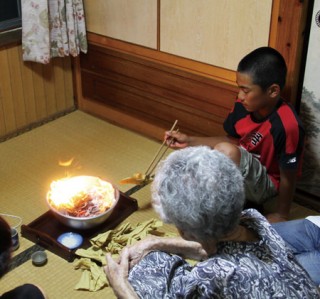 First of all, a foreigner might ask, what is the Obon festival? Siandmply stated, Obon is the festival for another world. It’s celebrated for only one day in most areas of Japan, but in Okinawa a three-day festival is observed. A lot of lot friends and relatives visit people’s houses, which have a Buddhist altar, or “Butsudan” set to honor the ancestors’ spirits.

The first day, called “Unke”, is the day of inviting ancestors to each house. The family cooks mixed rice called “Unke Jucie,” and set flowers, fruits a lantern to the altar. Sometimes there are also a sugarcane stick and horse dolls made of “Basho”, an Okinawan plant. For outside of the house, people set a candle for the sign of inviting the spirits.

On the second day called “Nakanuhi,” meaning the middle day, families serve three meals and light snacks to the ancestors, and light incense sticks. In some areas of Okinawa, families serve dumpling sweets or sweet red bean soup as a snack to the spirits. On the middle day, people usually visit relatives’ or friends’ houses to say a prayer to their ancestors, and spend time to talk and have a couple of drinks with each other while bringing gifts called “Ochugen.” These gifts are always first offered to the altar. It is proper to visit on the first or third day, too, if the family schedule so dictates.

On the final day, called “U-kui”, the spirits of ancestors are sent off to the lands of afterlife. The third day is considered the most important day, so if people can’t visit a home on the other days, they should gather at least on the final day if at all possible. The more family members are present, the more joy for the ancestors’ spirits.

Families cook Okinawan traditional cuisine with a stacked box so that night they serve them with rice cakes. The cuisine for setting stacked boxes is very special in Okinawa. It should consist of two sets; one for this world, and the other for the spiritual world. Another rule is that the number of dishes must be an odd number, usually nine or seven. It is also considered that the longer hours the party goes on the more the ancestors’ spirits enjoy themselves, so it is usual keep going until almost midnight.

At that time, the U-kui ceremony will be held. At the ceremony, imaginary paper money, “uchikabi,” is burned in a metal bowl called “Kaneba-ki” for the spirits to take with them when they depart. Items that were known to be the favorites of the departed, such as snacks, fruits, cigarettes, and alcohol are offered on the altar. Kaneba-ki is then brought to the gate or door of the house where a candle is lighted, and it is the time to send off the ancestors.

People also set a stalk of sugarcane by the entrance to help the spirits walk the dark and steep way to the other world, and a pineapple and incense for protection outside. It is said that when the smoke of incense clears, the ancestors are gone away.

Traditionally, almost at same time as the sending off ceremonies, each district’s youth eisa group starts an eisa performance. Originally Eisa was performed to send off the spirits and pray for their safe journey back to the other world. However, these days Eisa has evolved into an Okinawan folk tradition icon that is performed anywhere, anytime. The parade of eisa on the road is called “Michi june”, and a lot of Eisa local festivals are scheduled on both sides of Obon.