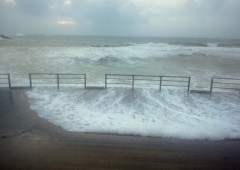 A man fell off his roof in Kagoshima Sunday and was killed, and a snorkeler drowned in Ishigaki some 200 meters off the coastline after being carried away by high waves as Typhoon Sanba crashed into land, plunging more than 110,000 households into darkness as power was cut.

In Nagasaki, 83-year-old Chuhei Mizoguchi slipped from his roof and died while preparing his home for the storm, while in Ishigaki, a 29-year-old Naha man was killed while snorkeling.  Sanba, the season’s 16th typhoon, moved on to the Korean Peninsula on Monday, causing extensive damage from the southern port city of Busan on into the central region of the country.

At Naha International Airport, most flights were canceled on Saturday late afternoon and evening, and  canceled again Sunday, and other cancellations extended into Monday.  Okinawa’s Churaumi Aquarium was closed both Saturday and Sunday, and a concert by pop star Namie Amuro was canceled Sunday after advance ticket sales signaled a crowd  of 27,000 expected.

High tide and torrential rains of typhoon Sanba caused the water levels to rise above the floor level in some 60 households in Higashi Village area, 25 of them in Gesashi district alone.  There was damage to highway 331 that had to be closed because of sand moved by the storm surge. Gesashi River in the village flooded when the high tide pushed water in the river, and many houses in the district were flooded.

A small community hall close to the river was flooded with water rising about 20cm over the floor level, and residents who had come to the hall from their homes for safety had to evacuate by boat.  A galvanized sheet iron roof of a construction firm in the district was blown away by strong wind, and a1-ton fishing boat was torn free from its moorings and thrown up onto a prefectural road in Kawata district of the village.  A 64-year-old woman from Kawata district escaped soaking wet together with a neighbor man who carried the woman’s husband at 6:30 a.m.  The woman said “I have lived here for 40 years, but this is the first time something like this has happened. I was afraid because it felt like a tsunami.”

In Toguchi district of Motobu town, the Manna River flowed over, and a lot of water rushed toward shops and houses 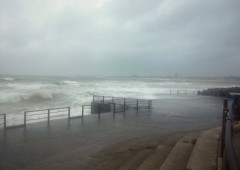 close to the river. The town broadcast an advisory to evacuate to 230 households in Toguchi district at 7 a.m., and a fireman helped 15 people to safety by boat.   37-year–old Takao Tomoyose who runs a stationery shop at the town’s market place saw the river’s water getting over its embankment, and the market was flooded. A PC and much of his merchandise in the shop was soaked, so he said “I have to dispose all of it.”

81-year-old Shizue Kamida who runs a china shop said “I have managed the shop in this market place more than 50 years, but this is the first time that we have had such a serious damage because of a storm surge.”  In Kunigami village, there was storm surge damage at Yasuda district.  Nine houses were flooded above the floor level, and almost half of the households were hit by immersion below the floor level, and also seawater rushed to a protected species of plant, “Sapotaceae’s protection forest”.

The head of Yasuda district, Hiroharu Kamiyama said “This is the first time we have had such a serious storm surge damage. We cannot accurately estimate a damage count yet.” In Nago City, high waves battered the East side seashore near Highway 331, and a part of a road and a temporary bridge collapsed at Kayo, Teima and Sedake districts.

There was also flood damage reported at many places in Nago City.  In Kayo district, storm surge rushed to the district at 6:00 a.m.   A temporary bridge that was created for rebuilding work collapsed, and the highway was impassable at several places.

At a house close to the seashore, the height of sea water reached about 1 meter at peak time, and sea sand was piled up to a house near the highway and 300 meters of the highway was covered with sand even after the tide went out.   Okinawa Prefectural Northern part engineering office started the recovery and repair work on Sep. 17th.

At Henoko district, Henoko River was flooded at high tide on early morning, and about 30 households reported flood damage.

On Highway 58 at Nerome district of Ogimi village, a collapse  occurred again to a slope where a landslide occurred because of the heavy rain of the typhoon last month, and red soil and muddy water covered the highway running about 300 meters. The highway was closed from 7:00 a.m., and Okinawa Northern Highway Office started removal work of the dirt and they are in a hurry.   Because of the effect of heavy rain and storm surge by Typhoon Sanba, roads in parts of Aja, Kyohara and Kohagura districts of Naha city were flooded about 20 ~ 40 cm depths, and many houses had water above the floor level damage.

In central and southern parts of Okinawa, there was flood damage, and some people evacuated from their houses, but there was no big effect. In a preschool, water rushed in over knee-level from a street. The first floor was flooded, the school’s sandpit was covered by muddy water, and three cars that were used in the preschool were damaged.  In Isa district of Ginowan city, water flew backward of gutter, and six households were flooded.