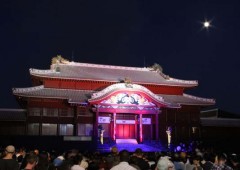 Shuri Castle is scheduled to celebrate its Mid-autumn Festival this weekend.

Colorful scenes of the Ryukyu Kingdom’s old and ancient times “Chuusyuu no utage” will be duplicated under the harvest moon this weekend, although the passing Typhoon Jalawat likely forces the cancellation of the festival on Saturday.

In the past, envoys from China who were called Sakufuushi came to the Ryukyu Dynasty because of a diplomatic mission so, The Ryukyu held a banquet to the envoys with great seven feasts. One of the seven banquets, called “Mid Autumn Celebration (Chuusyuu no utage)”, is reproduced on the two days. This year the festivities take place Saturday and Sunday evening.

On this Saturday, programs’ performers play Iriko Odori, Kumiodori, and ten other dances based on commentaries of the envoys. It is celebration for the 20th anniversary of Shuri Castle Park.

Sunday features living national treasures with musical performances and dancing. Following the program, Ryukyu classical dance, the contest for this year’s king and queen, a performance by a Living National Treasure, Kumiodori, and announcement of this year’s king and queen take place.  The special event runs for two days starting from Saturday evening at 6:15p.m. with the  programs starting 6:30p.m. and running to 9:30 p.m. at Shuri Castle Park Una Forecourt.

You can enjoy Ryukyu classical musical drama with English subtitles. Admission is free to enjoy the programs. You can appreciate one of the Okinawan famed performances in the world heritage Shuri Castle.