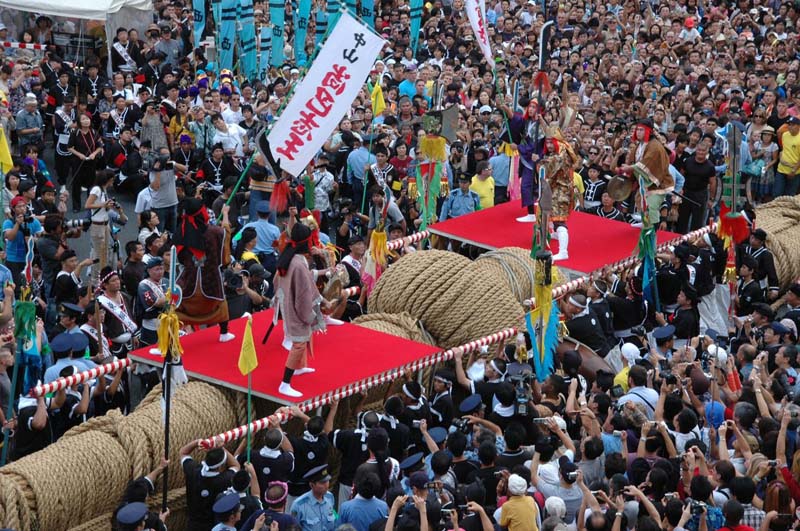 Ready to go! The rope is certified the biggest in the world, and some 25,000 people are ready o start pulling.

Answer:  A tug-of-war Sunday afternoon that will attract hundreds of thousands of spectators wanting to see if the Guinness Book of World Records feat can be topped.  The event takes place at Kumoji Crossing in downtown Naha, the centerpiece of the 42nd annual Ryukyu Kingdom Festival Tsunahiki.  For many who make the annual trek to the tug-of-war, the event is simply the Naha Festival tug-of-war. 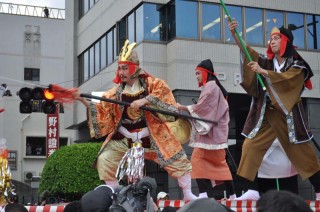 Both teams, the East and the West, have their own kings who lead their troops from platforms on top of the giant rope.

It is not only tug of war, but also much more as the three-day festivities include parades, music, the World Eisa Festival and this year, 80 contestants for the Miss International Pageant coming up later in the month.  Most of the events across the Saturday, Sunday, Monday period are free, although there are a couple of entry fees and everyone must pay for their own food and beverages at Onoyama Park and on Kokusai Street.

On October 6th, the opening day, there is the parade of international folk performing art and local entertainment.  The parade starts at Sion bridge in front of Sion Square at Makishi on Kokusai Street. Parades include marching bands & baton twirling, Campaign ladies of Naha tourist association, and an appearance by the Naha City mayor. Also  taking place will be Hatagashira performances, Kids eisa, Hawaiian Hula dance, Samba teams and 80 of the Miss International contestants walking at the parade. There will also be Hip Hop dancing, Shishi mai or Eisa dancing at the open space in front of the Pallet Kumoji department store. 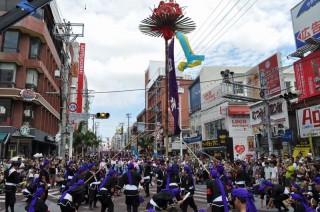 The second day of the festival is considered by many to be the main events. The 42nd Naha tug of war is the largest in Okinawa will be held on the Highway 58 at Kumoji Crossing.  It’s an event passed down from the ancient Ryukyu Kingdom era, and is the biggest event in cultural part of Okinawa.  The festival activities kick off with the massive parade down Kokusai Street starting from 11:30 a.m. ~ 2:30 p.m., followed by martial arts demonstrations at Kumoji Crossing before the actual tug-of-war which begins at 4 p.m.

The Naha tug of war once disappeared in 1935, but was revived in 1971 as part of commemoration of Naha City’s 50th anniversary. In 1995, the tug of war was recorded in the Guinness Book of World Records as a biggest rope made by rice straw in the world. Organizers keep growing the rope each year to maintain the world record.

The Sunday activities start at noon on Kokusai Street, when the eight east and eight west teams gather at the northern end for a two-hour parade down the 2.8 kilometer route.  Great photo opportunities abound, as everyone’s dressed in traditional Okinawa garb, and teams are carrying their 25-foot high team symbols.  More than 300,000 spectators are expected to watch the events unfold, with at least 25,000 joining in the tug-of-war itself.  Following the parade, everything moves to Kumoji Crossing, where entertainment, martial arts demonstrations and speeches pump up the crowd for the 3:45 p.m. preparations for the tug-of-war.

The tug-of-war pits the east against the west, the two 300-foot-long sections of rope being brought together and pinned with a massive 10-foot wooden peg.  Kings symbolizing the supremacy of the two dynasties in Naha centuries ago approach each other atop the rope, each with their royal courts, and issue challenges to one another.

The order given by the kings, team leaders will hop aboard the ropes and encourage supporters to take hold of the dozens of pulling ropes affixed to the massive  main rope.  That’s when the fun begins.  Battle lines are formed as the signal to begin is given, and each side begins hauling on the straw rope, each side trying to move the rope five meters within 30 minutes.

Cries of ‘yoishi’, ‘O Shoi’ and ‘Hai-ya’, meaning heave ho or pull harder, fill the air, motivating stronger efforts from participants.  Once the tug-of-war is ended, with or without a winner, it’s all friendship.  The best record was in 2004, when the west, in a lightning fast move, hauled the rope the five meters in only six minutes-26 seconds, a new record.  Knives come out as everybody begins to relax, cutting away pieces of the tug ropes for souvenirs.

The World Eisa Festival runs all three days at Onoyama Park starting at noon Saturday and Monday, and at 4:30 p.m. on Sunday. There are Karaoke tournaments, Sumo wrestling tournaments, and other programs, not to mention the  Orion beer paradise where you can enjoy beers along with live concerts or stage shows starting at 4 p.m. within Onoyama Park. There are fireworks on Saturday and Sunday from 8 p.m. at the festival, too.

The stage of Orion Beer Paradise is filled with entertainment.

From this year, the World Eisa Contest will be running at the Okinawa Budokan and Okinawa Cellular stadium on 6th and 7th. There are various teams from traditional style to new modern style eisas.   At Budokan, there is the world eisa festival featuring teams from not only Okinawa and mainland Japan, but foreign teams joining from Indonesia, Canada or Taiwan.

There is the Traditional Eisa festival on the field of Okinawa Cellular stadium by youth eisa teams from around Okinawa and elsewhere.

Entry to the Traditional Eisa Festival is ¥500 for each person over 12 years of age, and available only on the day of the event at the gate.  Entry to the World Eisa Contest is free.

All events and activities are free along Kokusai Street and the Sunday Tsunahiki on Highway 58.  Likewise, witnessing entertainment at Onoyama Park is free.  Costs for foods and souvenirs vary depending on taste and desires.  Parking is anything but free; it is difficult and expensive.  Plan on spending at least ¥3,000 for parking anywhere in the downtown area, depending on how long you’ll cruise the downtown and Onayama Park festival areas.  For those on a budget, check out tours offered by Marine Corps Community Services, including the Single Marine Program, 18th Services at Kadena Air base, Navy MWR or Army MWR from Torii Station.

From the military bases, head south to Naha City.  As you pass Tomari Port and to Tomarine Hotel on the right, you’ll find first opportunities for parking.  Turn left or right off Highway 58 and look for the blue “P” signs.  The alternative is to continue further into the city, crossing the bridge adjacent to Naha Military Port, and then looking for the parking signs.  For those planning full-day excursions, the more southerly parking is recommended because when you’re tired, the shorter walk back to the car will be easier.