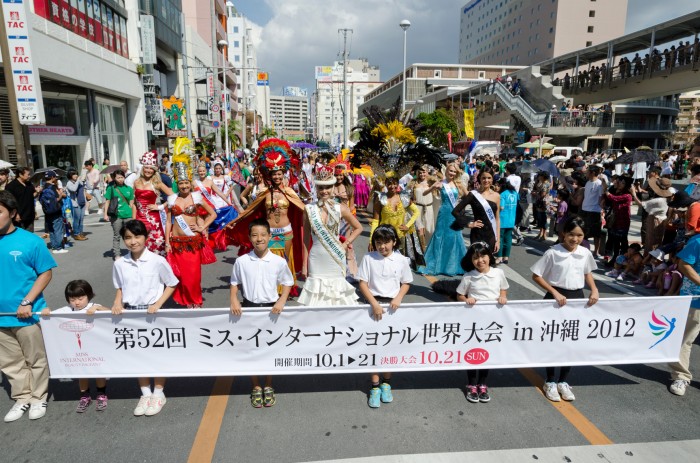 The girls took part in the parade on Kokusai Street dressed to highlight their cultural heritages. © Miss International 2012

It was an exciting three-day weekend for 80 beauty contestants in Okinawa for the Miss International Beaty Pageant, with the Naha Matsuri, World Eisa Festival, a couple of parades and the great tug-of-war all opportunities to mix and mingle with the locals.

The first week of a three-week buildup to the Grand Finale and selection of Miss International Beauty Pageant 2012 is in the books, and the young ladies have already had numerous opportunities to wear their bling-bling costumes, many showcasing their cultural heritages, while at the same time going totally modern with Mickey and Minnie Mouse at a Saturday parade on Kokusai Street. 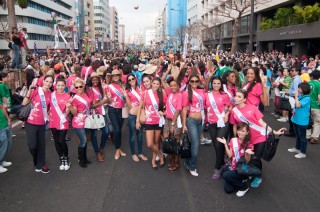 The Naha Great Tug-of-War was also on the schedule. © Miss International 2012

Sunday was, of course, the Naha Matsuri, complete with a two-hour parade down the Kokusai with the girls all decked out in their finest outfits, and then the ceremonies and martial arts demonstrations ahead of  the great tug-of-war.  After securing their pieces of history –chunks of the Guinness Book of World Records tug-of-war rope—the ladies moved to the World Eisa Festival at Onoyama Park, where they hung out until the fireworks were complete in mid-evening.

The festival was so much fun, the girls made a repeat visit to Onoyama Park on Monday, the final day of the festival, resplendent in their Yukata kimonos.  They told organizers it will stir great memories, and will be worn frequently upon return to their home countries.  Tuesday was another active day for the contestants, who split into two groups for visits to Okinawa World or Ryukyumura, two of the top theme parks on the island. 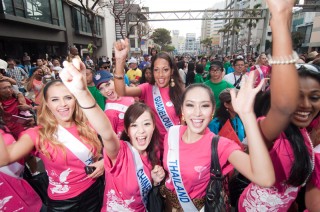 Everybody was having a good time. © Miss International 2012

After a well-deserved day off Wednesday, the girls are back in action today, enjoying marine leisure at Kanucha Resort, and taking a stab at studying clean energy.  Tomorrow they’ll dabble in a Karate experience at Okinawa Shogaku High School, then visit Okinawa City and cheer the Ryukyu Football Club at Okinawa Prefectural Athletic Park on Saturday.  On Sunday, it’s the Nanjo Festival in Nanjo City, and then some beach cleaning at Naminoue Beach or Ryukyu Corazon handball.

The pageant contestants again split to two groups Monday for travel to Ishigaki and Miyako Islands for appearances, followed by a traditional American steak dinner at the Seamen’s Club Naha.  The rest of the week is getting ready for the pageant finals, which take place Sunday the 21st.