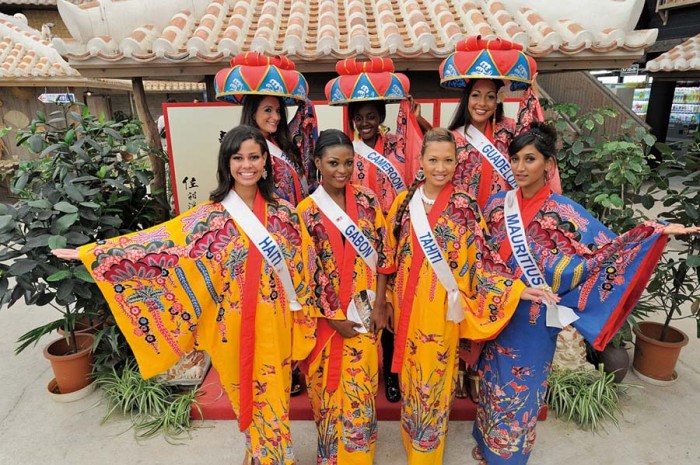 Some of the girls tried on Okinawan bingata kimonos.

Eighty of the world’s most beautiful young women are starting to get that “itchy” feeling in their tummies as the finale to the Miss International Beauty Pageant 2012 takes to the stage Sunday after nearly three weeks of exciting activities on Okinawa. 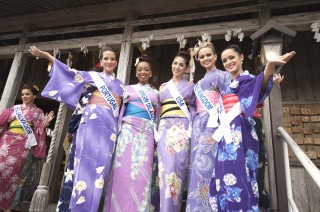 There’s a lot to be said about the Miss International pageant, and how it’s captured the excitement and imagination of Okinawa these past weeks as the girls from around the globe descended on the island to participate in a variety of history and culture classes, and then jumping on the buses and planes to really see the island.  Okinawa has embraced this pageant, and with support from the Okinawa Prefecture Government, has committed to host the pageant annually for the next decade. 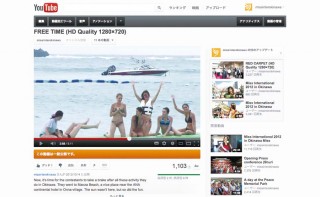 HD quality videos on the pageant contestants’ activities are on YouTube.

It’s not over yet, either.  Governor Hirokazu Nakaima gets his chance to spend an evening with this bevy of beauties, as he hosts a reception at Bankoku Shinryokan before Sunday’s finals.  The finals are at the Okinawa Prefectural Budokan in Onoyama Park on Sunday afternoon. Tickets are available to the general public at a nominal ¥3,000, and every seat is reserved.  Tickets are available at FamilyMarts across the island.  Doors open at the Budokan at 4 p.m. and the event begins at 5 p.m.

Miss International Beauty is an easily followed event, with a well-constructed web site at http://missinternational-okinawa.com.  Photographs, information about the pageant and its history, and plenty of action with the contestants is all on-line.  There’s also a Facebook site that anyone can visit, LIKE and enjoy.  The social media also includes a YouTube official channel called I-TV and Twitter.

Shooting staffs have been covering every aspect of the pageant activities and are posting within hours of every public appearance.  Organizers encourage the public to catch the pageant fever, visit the website and Facebook, and let them know what you think.  The entire Miss International staff is trying to introduce the pageant to as many people around the world as possible, with high quality video and still photography.  A primary goal is to use I-TV to promote the event worldwide, drawing attention to Okinawa.

The pageant finals will be broadcast by the Ustream online program.  Details are on the Miss International website.

The pageant is more than just a beauty pageant.  The corporate theme is “When women proclaim their femininity to the world” and activities follow the promotion “Love, Peace and Excitement to the World.”  With the pageant settling here in Okinawa for the coming ten years, Okinawa will reap a good many benefits as it establishes relationships with sponsoring countries around the world.  Okinawa has declared itself a land for all women, and a land where they can celebrate femininity with respect and honor.